Where is there contra dancing? Let's make a map! 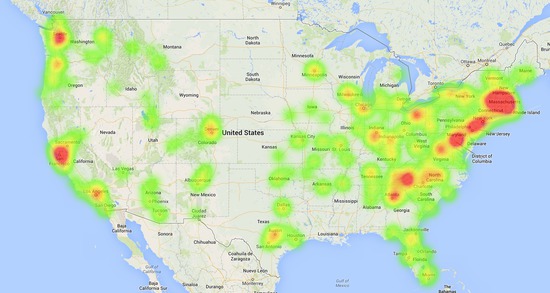 Why are these blurry areas instead of points? Because people are generally willing to travel some distance to go contra dancing. To make them less vague you could zoom in. This is US only because that's all the data I have.

(I just went through and updated the full list of dances on trycontra.com, making sure all the links still worked. In the process I also wrote down the approximate number of times per year a dance meets. The raw data is here and if there's something inaccurate about your local dance let me know!

(Yes, it kind of just looks like a population map. Should I be showing dances per-capita instead if I'm interested in relative popularity? Or is it clear enough from this that the north east, especially MA and southern NH are overrepresented?)

Update 2014-08-02: I also made a version with clickable links to dances: heatmap-points.