Now imagine that Small State is in a position where they control both houses on the presidency: can they turn a temporary advantage into a longer-term advantage by changing the size of the House?

First, the size of Congress is set by federal law so they are in a position to change it. The only constitutional restrictions or is that it needs to be proportional to population and that every state needs to get at least one representative. [2] If you shrink Congress until there are only 50 seats, one for every state, then it advantages the Small State Party by as much as the Senate does, while if you grow it substantially the minimum single Representative that each state gets starts to matter less. 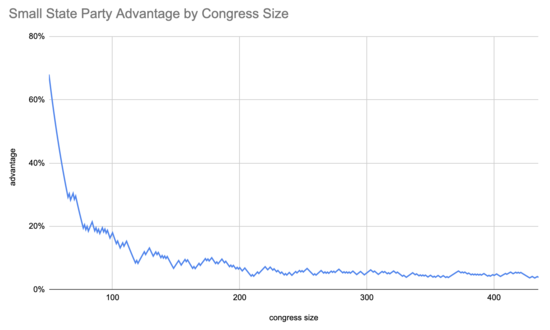 While the Republican party is moderately more popular in smaller states, the current situation in the US is much less dramatic than the Small State / Big State divide above. We can label states as "Red" or "Blue" according to the Cook PVI [3] and see what this would look like with our actual political situation. This is throwing away a bunch of information, since I'm turning a nice range into a binary, but it makes the analysis much simpler. I'm also going to ignore the states that the PVI has as a neutral: NH, PA, WI. 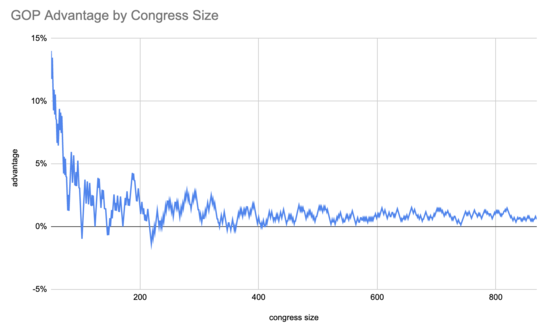 Overall, with our current political alignment, this doesn't look like a knob that people are likely to be trying to turn. You'd need to make the House so small that it would only dubiously filling its constitutional representational function before you would have much of an effect. Even if the parties were to realign, closely following a big state / small state axis, the necessary size change is still quite large.


[1] Technically, Washington DC gets as many electors as it would have if it were a state, but no more than the smallest state. In all of the scenarios we're talking about here it comes out to be three.

[2] Technically, you also can't have more than one representative for every 30k people, but since the US population is over 300M, this would put the size of Congress at over 10k.

[3] I downloaded my numbers from Wikipedia, which says that the PVI numbers are based on the 2012 and 2016 presidential elections.