Sometimes we talk about how society is "path dependent": what things would be different if history had not followed its particular path? One place that's fun to think about is time. Until the development of railways, places used local solar time. Washington DC is at 77°W while NYC is at 74°, so clocks in NYC would be set ~12min ahead of those in DC.

Initially, this didn't matter: traveling from NYC to DC was a multi day endeavor, so a 12 minute difference in clocks was trivial. As roads got better and then railroads were built, however, travel times decreased enormously: 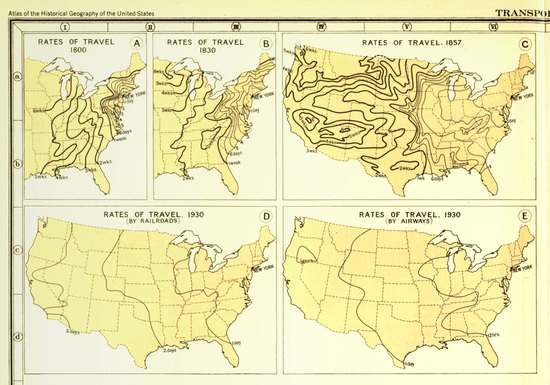 Atlas of the Historical Geography of the United States, 1932

If you're running a railway system, it's really very useful to choose a single location's time to use internally. Your workers are moving East and West, fast enough for this sort of discrepancy to become a problem, and they certainly don't want to be continuously changing their watches as they move from town to town. Railway schedules are much easier to work with if they use railway time, people start using railway time in their regular life, the government adopts a system of time zones.

Imagine, however, that things had gone differently and we were still on local solar time. At this point it would not be hard to make our phones always report the correct time as we move east and west, since our phones know where we are. Automated calendar software could deal with local solar time with about as much effort as it could with time zones. Do all routes to the present pass through a system of time zones, or is there an alternative history where we really could be on local solar time today?

Railroads need shared time much more than other forms of transportation. There are a small number of high-capacity tracks, and the same with vehicles. Efficient use requires central organization, coordinated operation, and shared scheduling, which is far easier with a shared time system. If instead of railroads we had developed cars, it would still be annoying to need to reset your watch as you move between places, but it would be much less of an issue. Perhaps we could have had political systems which made private railways impractical, combined with governments that were not competent enough to run their own? Or progress in making lighter engines could have been much faster?

Alternatively, if you had lots of North-South rivers or a society distributed among islands in an archipelago, railroads would not be practical and boats are much slower. Perhaps you could have the the development of computers before the speedy East-West travel that pushes for time zones?

The telegraph is also an interesting case, since it allows rapid communication over long distances, if not travel. I don't think the telegraph or even the telephone provide enough impetus to move society to switch to time zones. It's just not much of a problem if the telegraph operator in NYC thinks it's noon when the operator in DC thinks it's still 11:48. You could have big tables showing the offset of every city, and allowing quick time calculations when necessary.

With radio and television people do care about what time different things are going to be broadcast. On the other hand, they are naturally geographically limited: 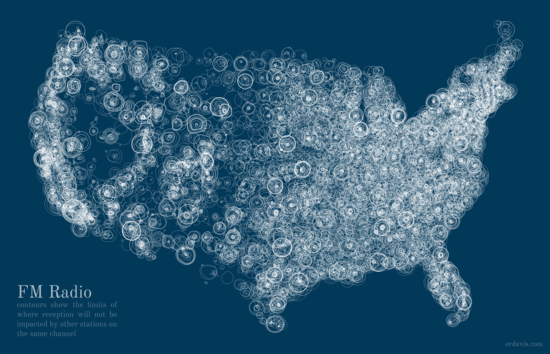 This is probably enough to expand local time from being immediately local to being maybe a ~40mi radius, but that is only about a 2min time difference. On the other hand, an overlapping chain of broadcast areas would have pressure to all use the same scheduling time, and at least in continuously built-up areas like the Northeast United States that would probably be enough to pull everyone onto the same time.

While the time zone system gives awkward discontinuities, where time can jump a whole hour in a single step, at this point I would not seriously push for us to move to local solar time. Still, it's fun to imagine histories that would have left us with that system.

←
Why Huntington-Hill? Changing the size of Congress
→