I made a map of boston area apartment listings, colored by price per bedroom: 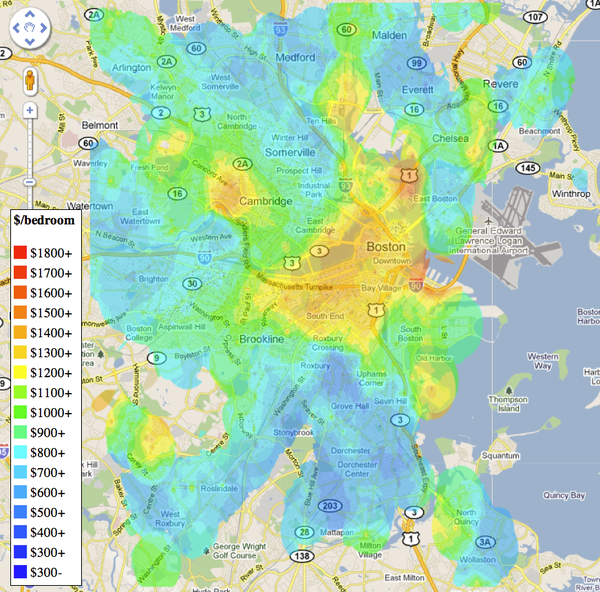 (I also made a larger interactive version)

The data comes from the excellent site padmapper that gets its listings from craigslist and elsewhere. The data points are black dots. The farther you are from dots and the less dense they are in an area, the less accurate it will be. The data is current; I'll probably do another one once all the 9/1 apartments are on the market.

The interpolation is inverse distance weighted averaging, where I'm lazy and am using simple cartesian distance on lat/lon instead of real great circle distance. Locations that don't have at least five data points within some threshold distance are left transparent.

This suggests doing something by square foot would be good, though I don't think I can get that data as easily. So something to keep in mind: in the cheaper areas, landlords have likely made less of an attempt to convert any space that could possibly be a bedroom into one.

Update 2012-06-29: Someone suggested it made more sense to plot price per room instead of price per bedroom. Assuming that each apartment had one more room then bedroom I generated a new map.

What I've been doing instead of writing

I’ve been too busy with work to write much recently, but in lieu of that, here’s a batch of links to other stuff I’ve been doing elsewhere. The thing I’m most excited about: Wave raises $200m from Sequoia, Stripe, Founders Fund and Ribbit at a $1.7b valuati…

Some reasons to measure

A question I get asked with some frequency is: why bother measuring X, why not build something instead? More bluntly, in a recent conversation with a newsletter author, his comment on some future measurement projects I wanted to do (in the same vein as ot…