About a year ago I made a map of the price per bedroom of Boston-area apartments. In some ways that's useful and easy to think about: "how much does it cost to get a bedroom?" is a decent approximation for "how much does it cost to live there?". Recently, however, some people pointed out that it's trying to model something that's not very consistent. A three bedroom apartment is about the same cost to the landlord as two one-bedroom apartments, while my original map matched them at 1:3. The original map also doesn't distinguish one-bedrooms and studios: they're both counted as having one bedroom.

I've rerun the calculation for price per room, assuming each apartment has one more room than the advertised number of bedrooms: 1 for studios, 2 for one-bedrooms, etc. The revised map: 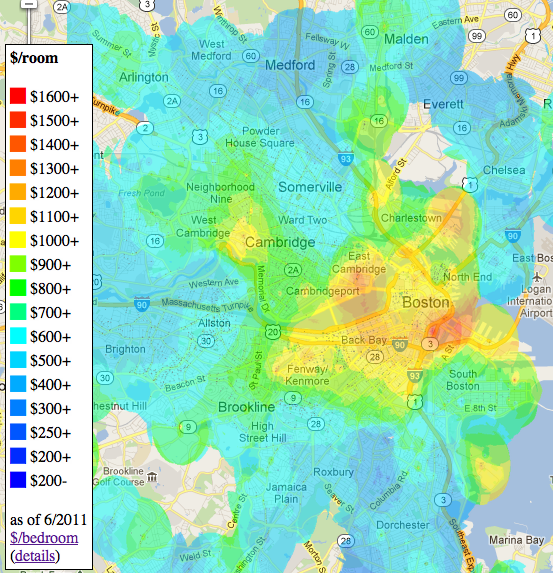 I also made an interactive zoomable version.

I'd like to update this with 2012 data, but the data import process was dependent on an undocumented part of the padmapper api, which has changed.