so far over budget that it got canceled and then re-launched in a cheaper way. One key to reducing costs was eliminating plans to build large custom stations and going with simple bare-bones ones instead. So why did they propose the large stations in the first place? I have no idea. The existing and well-used Green Line stations are incredibly bare-bones. There was nothing in the local transit tradition to suggest that the extension needed large grand ones. All else being equal, people might prefer a really grand station to a bare-bones one, but there was no MBTA modeling that claimed this expenditure would make the system dramatically more appealing. They simply weren't asking the question "what will the ridership impact of this spending be?" because American transit agencies aren't in the habit of asking those questions.

Yglesias is citing a Transit Costs Project report, and his summary is fair. In fact, the 2016 redesign wasn't just more riders per dollar but, according to the MBTA, the same number of projected riders for a much lower cost (p283-284 of the 2019 TIP report). But Yglesias (and the TCP report) imply that the stations as finally built are simpler and cheaper structures than they actually are.

Let's look at the Ball Square station, the one I'm most familiar with since it's close to my house. Here's the layout: 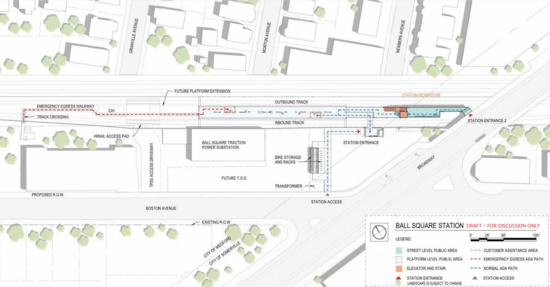 Let's look specifically at the second entrance. It required an elevator, stairs, a three-story structure with a roof, and a connection to an existing bridge. What do you get? For riders heading east across the Broadway bridge it saves ~150ft horizontally (140ft vs 290ft) and ~20ft vertically. This probably applies to ~1/3 of riders, based on the fraction of nearby housing is across the bridge and that Ball Square itself is on the station side of the bridge.

I can see an argument that this entrance was worth the cost, by making it easier and faster for people who need to cross the bridge, especially if they use wheelchairs or strollers. Alternatively, keeping the money and using it to help extend the Green Line to Route 16 might have been better, or spending it elsewhere in the system. But either way it's an example of the kind of thing I think you wouldn't build if you were following Yglesias' proposal to maximize ridership alone.

←
Can Ads be GDPR Compliant? Running by Default
→