I've been thinking about power in situations when the grid is down. Some things we'd be sad to miss:

What are good sources of power when the grid is down?

One factor to consider with each of these is how clean the power is. There's a range from "pure sine" output, which is what electronics are expecting, to "pure square" output, which is easiest to generate. Pretty much nothing puts out a square wave, so really the low end of this range is "modified sine", a very rough approximation of a sine wave. People talk about "total harmonic distortion" (THD) with "pure sine" being <3-5%. So many things these days involve electronics that we need some way to get pure-sine power (frying the computer in our boiler with dirty power would be pretty bad) but most of our power needs are for the fans which wouldn't care.

What are the costs involved? Some estimates:

We can plot these different options, showing how much you'd need to spend to get a given amount of power during an outage. These are all assuming that what you start the outage with is what you have for the duration: 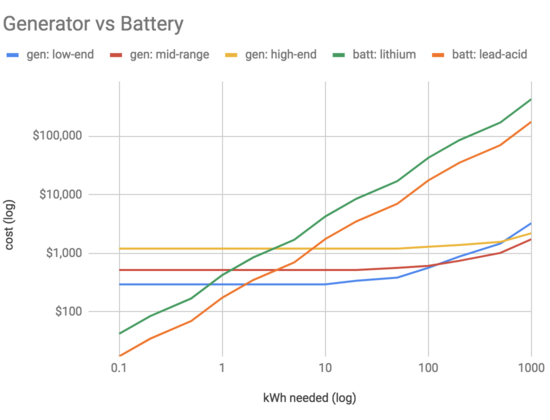 What I take away from this:

What are things we might want to run during a power outage, and how much power do they take over the course of a day? It depends on the time of year; here's summer:

Even though it gets much farther from ideal human temperature here in winter than in summer, our main electrical demands are in summer. This is because the heat is almost entirely natural gas, with just a bit of electricity to keep it going. We do still use the fridge and freezer in the winter, but in an extended outage we could keep food in coolers outside, or make ice overnight and bring it in.

I'm not sure yet what I want to do. Here's what I'm considering:

Talking about generator+tank with a kWh rating assumes that generator run time scales linearly with load, which it probably doesn't. For example, if I want to run the generator constantly for three days and it never uses much less power than it does at half load then both generator options go from needing one tank ($45) to needing seven ($315). Looking online it's hard to get figures on how much power a generator consumes at, say, 10% load.

Still not sure what I'll do, but here's where I am now. Thoughts?