You famously only need four chords to play everything, or maybe it's only three. But how true is this really?

I decided to go look and see what was common. I looked at a large number of transcribed songs, writing down which chords were used. This isn't perfect: some chords are more optional than others, but it's about right. I only wrote down the triad: C7 and Cmaj7 are just C. I used three sources:

Out of these 408 songs, here's how many include each chord: 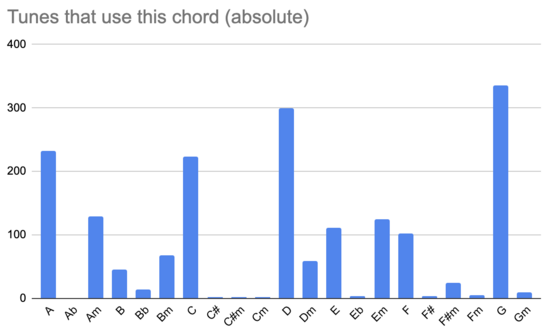 This isn't a great way to look at it, though, because it is absolute and music is (mostly) relative. We perceive a song that goes "C F G" very similarly to one that goes "A D E". Musicians will often use "Roman Numeral notation" to talk about chords in a purely relative sense. If we look at "C F G" relative to "C", or "A D E" relative to "A", we can call them "I IV V": they are each three major chords using the first, fourth, and fifth notes of the major scale. We indicate minor chords by using a lowercase number: "iv" would be "Am" relative to "C", or "F#m" relative to "A".

Here's what this looks like in C, for example:

Here's the same chart as above, but with relative chords: 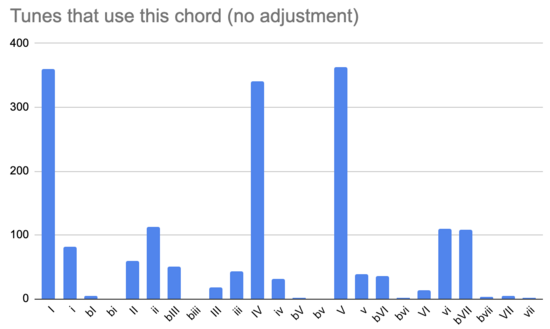 This is mechanically converted, and assumes every song is using the standard major scale, which of course they aren't: see all those "i" chords? Instead of thinking of a song with "Am C F G" as being "i bIII bVI bVII", we should think of it as "vi I IV V", as if it is in C (the relative major). This focuses our distribution: 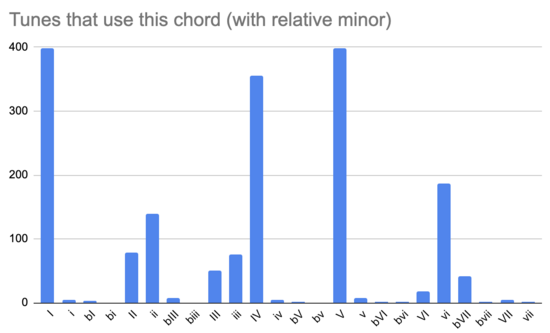 Some songs are neither major nor minor, but in other modes, typically mixolydian. These have chords like "A G D". Instead of "A G D" being "I bVII IV", we can think of it using the corresponding major and use "V IV I": 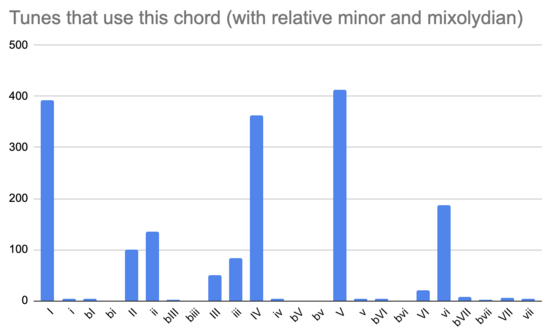 While it's almost always I, IV, V, and vi, we have both II or ii, and III or iii, differing on whether the third is major or minor. One way to handle this is just to drop the third from all the chords: 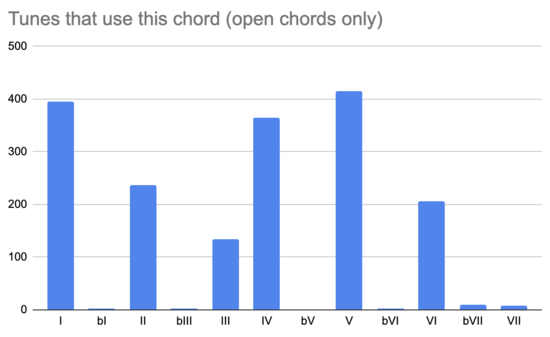 So: If we choose a few chords, what fraction of songs/tunes can we play?

We can actually do slightly better than this: while above I only adjusted for relative minor and mixolydian, we can be more aggressive and try interpreting the song against all 12 possible scale degrees. But it doesn't change things very much:

There are small differences between songs and contra dance tunes:

What are those stubborn ones which we still can't play, even with this many chord options?

As for how this applies to my own instrument-making, for now I've gone with "I ii iii IV V vi" and an option to use chords without thirds.

All code and chords are on github.