Mary sells tasty pizza from her food truck. Charging $2/slice, she always has a long line. A friend points out that charging a bit more would probably mean selling fewer slices, but with the higher price she wouldn't need to sell as many to come out ahead. After some experimentation, Mary finds that $3/slice is where she makes the most money.

Another friend notices that some people are in a hurry and would be willing to pay a premium for pizza now instead of waiting in line. Would there be some way to charge different people differently?

The next morning Mary puts up three signs on the side of the truck: $2, $3, and $5. As people come for pizza she asks them to make three lines, one for each sign, based on how much they want to pay. She tells people she'll serve one person from each line before moving on to the next so no one starves. 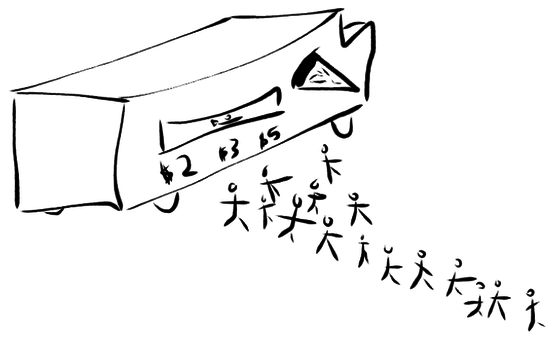 The $2 line is long, as it used to be when $2 was the standard price. Some people would rather have pizza sooner than money and wait in the $3 line. At $5 there is no line, but a few people in a hurry use it to walk up and get expensive pizza right away. Mary makes more money, the people who can afford to pay less get cheaper pizza, and the people in a hurry now have an option to trade off time and money.