What matters in evaluating charities is results, but most charities either don't have or don't share the necessary evidence. The GiveWell approach with AMF, SCI, and Give Directly has been a combination of in-depth research into the specific charities and looking at the non-charity-specific evidence for the intervention in question. Unfortunately this is very time-intensive, which means it's expensive on a per-charity-fully-evaluated basis. For identifying the very best charities this is fine, but if you're Charity Navigator and want to rate the whole field it just doesn't scale.

While I didn't see any way to fix this, I've now read their description of CN 3.0 (pdf), and I'm actually kind of optimistic. The idea is that you change the incentives so that charities are putting more information out there, and then you can evaluate them better:

In the future, when more results information is available, Charity Navigator will assess those reported results. But before it is possible to evaluate results, it is necessary to shift the paradigm of charity reporting from the current norm of selectively reporting, such as storytelling or case studies that may not be representative of overall performance, to reporting on demonstrably important measures, and showing how the organization learns and improves based on those measures.

Here's an example of that results reporting: 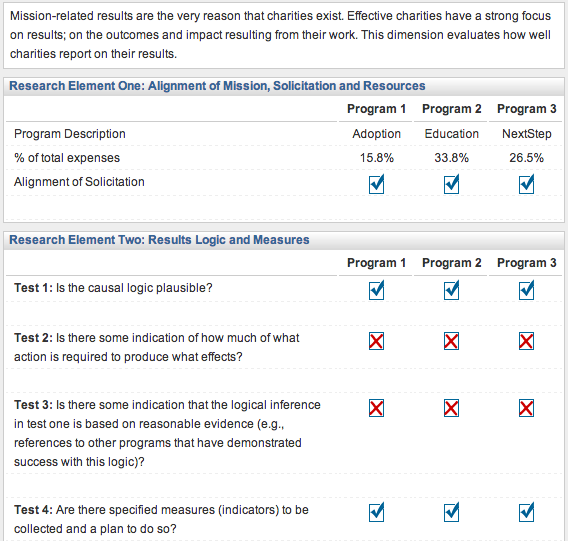 While this isn't perfect, it's still very good news: Charity Navigator is influential [1] and shifting money to more effective programs is valuable.