I have stereo channels I want to unlink. Simple linear interpolation turns out not to be the answer, so I need to determine the relationship between gain, pan, and the output levels experimentally. I set up my VSL1818 as: The phone generated a tone, which went into input 1 of the mixer. I connected outputs 3 and 4 of the vsl1818 back to inputs 2 and 3. In software I set the mixer to send input 1 to outputs 3 and 4. Then a program I wrote iterated through combinations of gain and pan while measuring the levels of input 2 and 3:

This is frustrating because of two different sources of nonlinearity. The first is that gain and pan are combined in some way I don't yet understand. The second is that the chosen gain (out) and measured level (in) aren't linear either: 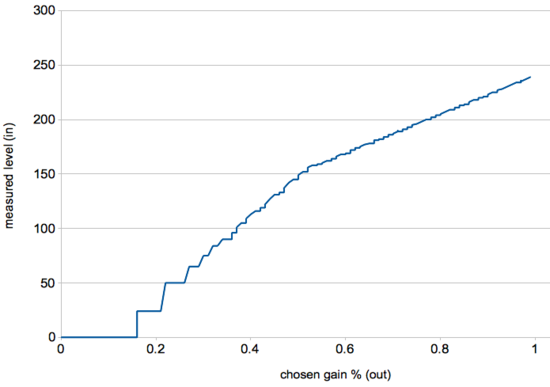 One channel constant at 0 (raw)

One channel constant at 24 (raw)

One channel constant at 65 (raw)

One channel constant at 84 (raw)

My goal is two functions:

I think I now have the data I need to write these functions, but I'm still not sure what they are.
←
Why Does Inflation Matter? Express Escalator
→