A few months ago I brought home an Emenee toy organ someone was throwing out. It didn't work, and it sat in the basement for a while, but today I had a go at fixing it. It's a very simple design: a fan blows air through a hole in the bottom, setting up a pressure difference between the inside and outside. When you press a key that opens a corresponding hole and air can flow through, past a little plastic reed, whose vibration makes the note.

With mine, the motor was running but I wasn't getting any sound. I opened it up and nothing was obviously wrong. I figured it was probably leaky, and put tape around base where the plastic sides meet the chipboard bottom. This fixed it enough to get some sound:

The lower octave isn't working at all, and the higher notes get progressively slower to sound and breathier until the very highest don't sound at all, but this leaves an octave and a half of chromatic range. Enough to play around with!

The left hand buttons play chords, and are arranged: 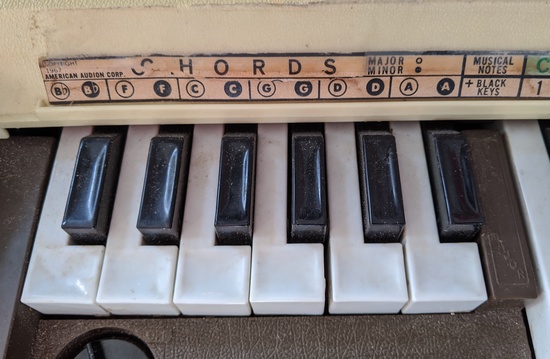 The circle of fifths arrangement makes a lot of sense, but the choice to put major and minor chords adjacent does not. If you're playing in a major key, you generally want the vi and ii minors, so Am and Dm in the key of C. This means the vi minors they've included are used in flatter keys than they've provided: F and C can use Dm and Am, but G and D would like Em and Bm which are absent. Shifting the minors over three notes would be much better. They layout would change from:

to Now in each key you have: instead of:

Playing folk music I also would have preferred that they center on G or D, since I care much more about having E than Bb.

Another change that would be nice would be to offer a way to control the way air gets into the organ. There's a hole on the bottom for the fan, and if you cover it the organ stops working because air can't get through. It has a screw-adjustable cover, which looks like it's designed as a volume control: 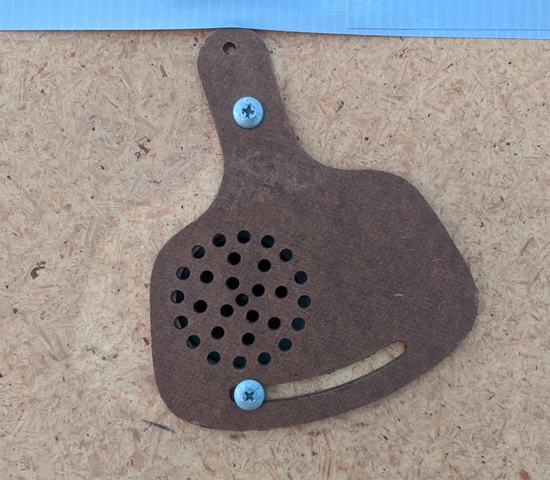 You could build a simple adjustable cover connected to a foot pedal, and get a real expression pedal. This would have added to the cost of the instrument, so I understand why they wouldn't want to do this with a toy, but it would be a simple-add on.

I'm probably not going to keep this, since my regular keyboard can do everything this can do, so if you're in the Boston area and would enjoy playing with it let me know!