If you connect a video camera to a grid of electrodes on your tongue, you can learn to use the video camera as another eye, via your tongue. (I was excited about this earlier.) Right now this is pretty much only used in cogsci demonstrations, though a company is working towards fda approval [1] on one for blind users: 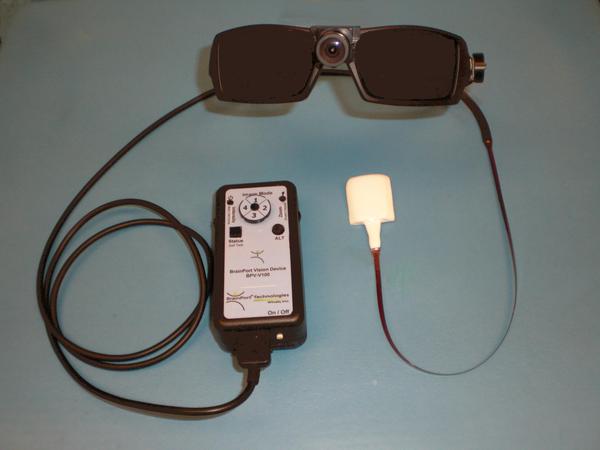 You could also make one with the goal of providing an additional vision-like sense to people who could already see. For wide adoption there are a few constraints and a few options. It would need to be:

One potential solution would be to have a device on the ear talk to a phone or something via bluetooth, and then send analog wireless sigals to a much smaller device in the mouth. The mouth component would be entirely passive, receiving signals with tiny tightly tuned antennas. There would be one frequency per pixel, and the per-pixel circut would convert energy on that frequency to current on the tongue. The output currents need to be about 10V at 2mA, ranging down to 0 for full black. This means we don't have to put a battery or any computation in the mouth, but it also means we lose energy to transmission losses. I don't know much about antenna design, so I don't know if this is practical, but it seems similar to what rfid already does with wireless power. The primary advantage of this is no ugly and embarrassing cable hanging out of the corner of your mouth, so if we could get people to accept cables instead that would be easier.

For the mouth component you could do either a retainer of a wafer on the tongue. The wafer style thing is easier and cheaper, but gets in the way more when you talk. People could get good at quickly stowing it in their cheek, though. I think either way you'd need to take it out to eat.


[1] I don't understand what about this needs fda approval. Is it that it helps blind people? That it goes in your mouth?

[2] It took a long time for glasses to become accepted on faces, and not an object of ridicule. People still wear contacts in part because they don't like how glasses look.

←
Why Can't We Replicate? Electricity And Water
→