Thanksgiving was nice, but sort of strange. Alice, Rose, and Danner came from Western Mass; Anne, Lee, and Meghan came from Philly. No same-age cousins, though. Calmer than usual, and a little less fun without Stevie, Susanna, and Claire. But still fun.

We played a lot of the Train Game, and I tried a 'rush' strategy where I ignored all route tickets and just went for the six train fifteen point routes that would use up my trains really fast. I also took routes when it would make someone else take a costly detour. The goal was to finish the game when lots of people would have routes unfinished and couting against them. It worked, and everyone was mad at me. A bit disruptive.

I finished up the light for my bike. I ordered a Cree XR-E (R2 bin, WH tint, about 115 lumens ar 350mA) from Cutter along with a 10 degree / 40 degree elliptical lens with holder at 90% efficiency. I'm running it off my new Sturmey Archer X-FDD hub dynamo (6V at 3W). I put the LED in the place of the incandescent bulb in the chrome bullet headlight that came with my bike. Pictures: 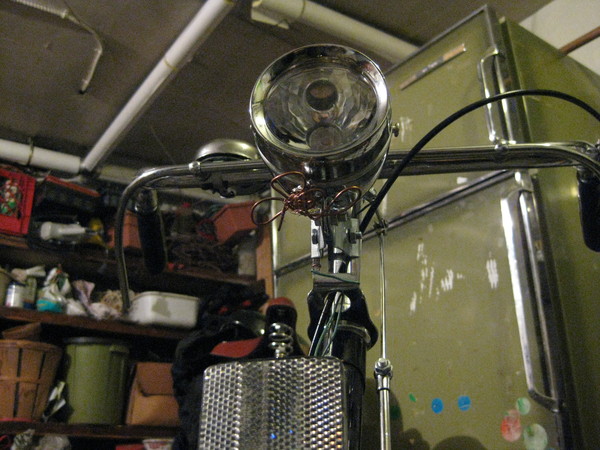 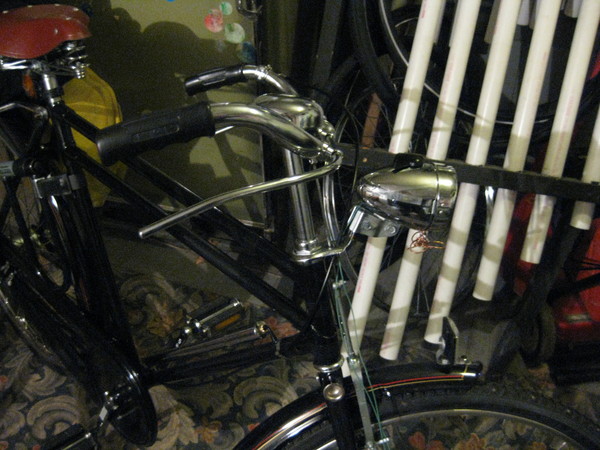 That copper mass under the light? Heatsinking. The light is only about 15% efficient, so the rest of the 3W is heat. Unlike a bulb, that makes the led unhappy. So I have the LED mounted on an aluminium star, that soldered to 12 gauge copper wire, that running through a notch cut in the bottom of the light enclosure and soldered to a beautifully twisted copper marvel (rats nest) to maximize heat transfer with the air.
←
Toridal Go New Bike Wheel
→