Several of my friends have shared this paste (or shares of it) on Facebook:

This is the current state of the Loire, the longest river in France. This has not happened before in at least the 2000 years since literate people inhabited France. The Romans would have written about this. The medieval Franks would have written about this. To the best of our historical knowledge, nowhere in the past 2000 years has the Loire run dry, and likely never long before that. The drought that now grips southwestern Europe may well be unprecedented in recorded human history.

This is in the heart of wine country where grapes grow in abundance and wheat waves like golden seas- but not now. Now the wheat burns and the grapes whither to raisins on the vine. This is the end of days. And on Monday morning I'll return to work and pretend this isn't happening. It's complete madness.

Along with this picture: 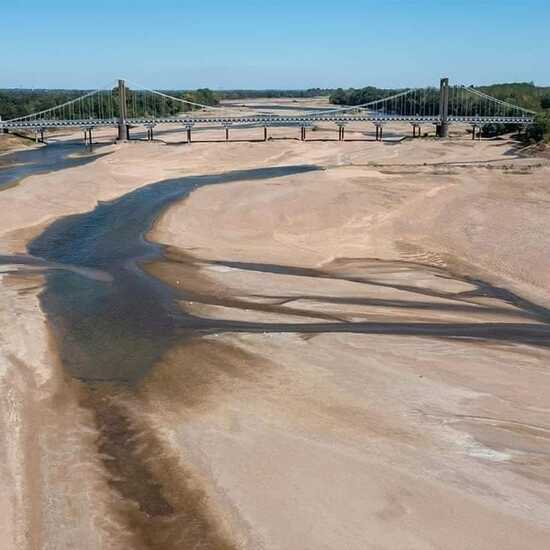 But it's all bunk. While the Loire going dry would be a big deal, it's not dry, and this picture isn't unusual.

The picture is of parallel path of the Loire where its crossed by the Pont de Varades bridge. The main flow of the river is just East of this picture, off to the left:

"The current flow is low but not unprecedented. It corresponds almost exactly to the decadal low VCN3. That is, at a constant climate, we expect to reach it over 3 days on average every 10 years."

There is definitely a drought, and the heatwave has broken many records, but these water levels are not anywhere close to a "haven't seen in 2000 years" event.