Interacting with phones by talking to them has gotten enormously better over the past few years, to where for many tasks it's now the most efficient way to interact with them. For example, saying "set a reminder for 10:15pm: laundry" is really fast and switching to it has led me to set more reminders for myself.

One thing that makes this mode of interaction even better is having the speech go quickly. Not only can you talk to your phone quicker than you would talk to a person (try it!) you can set your phone to talk to you very quickly. (On Android, at least.)

On my phone this is Settings > Accessibility > Text-to-speech output > speech rate: 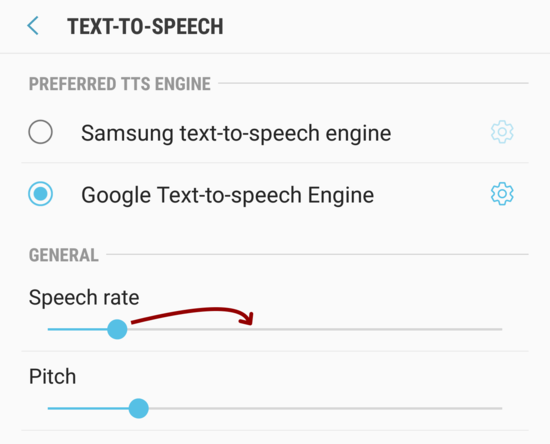 The main frustrating thing is that some apps, mostly Google ones, don't respect this setting. For example, if I ask a question to Google Assistant, it answers at its default (slow) rate. And while I can't reproduce it now, I believe Google Maps sometimes gives directions quickly (as I've set) and other times slowly (the default). I'm not sure what's going on, but my guess is that the setting only affects speech that is synthesized on-device, and some Google apps instead synthesize it on a server?

(I think this is an accessibility regression, because Assistant also doesn't respect your setting if you tell it talk slower. And this setting did used to apply to Assistant. Unfortunately, as an ex-googler I don't have a way to report bugs anymore.)