(I work at Google, but not on Chrome. Speaking only for myself.)

Chrome has proposed TURTLEDOVE to support remarketing ads without sending your browsing history to advertisers. (discussed in why I work on ads). Since the overall proposal is very complicated and requires large changes, they have also proposed an initial version, FLEDGE, that they expect to build and ship this year. They're building it incrementally, and they've now checked in very initial prototype support.

Lots of things are still missing, but if you download Chrome Canary and start it with --enable-features=AdInterestGroupAPI,InterestGroupStorage,Fledge,FencedFrames you can play with what they have. For example, on my Mac this looks like:

I made a demo: 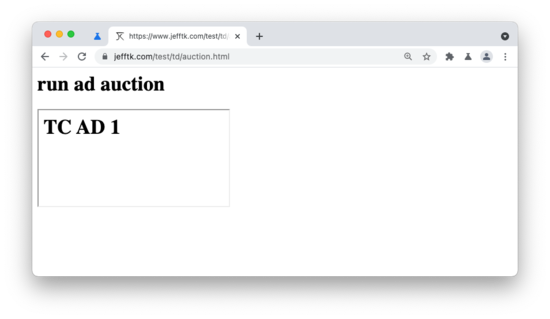 Things I ran into in setting up the demo:

Keep in mind that this is a minimal initial implementation, and there are large parts of the spec they haven't gotten to yet. If something that is implemented doesn't work yet, though, it's probably worth filing a bug.