If you're considering buying an air purifier for reducing covid risk, the EPA recommends comparing them based on their Clean Air Delivery Rate (CADR) for smoke. But what if you want to evaluate a purifier yourself? Perhaps you don't trust the manufacturer, want to evaluate an off-brand filter replacement, have built a filter cube, or put together something weirder? How can we measure purifier performance?

What we would like to calculate is the device's smoke CADR: when given smoke-polluted air, how quickly can it clear the smoke? This is something we can test:

Burning matches is a good way to create smoke, but you get a lot of variation in exactly how much. Here are twenty four trials where I burned seven matches and measured the peak amount of 2.5µm smoke "pm2.5" with an M2000: 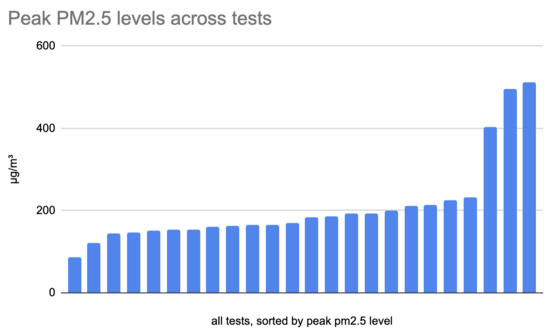 Even if you exclude the one trial where I got unusually small amount and the three where I got an unusually large amount, the middle twenty still varied over a range of 121-233 µg/m³, almost 2x.

While creating a consistent amount of smoke is difficult, I think it also isn't needed. A filter removes a consistent proportion of its input for each size of particle. If you put very smoky or nearly clean air through a MERV-13 filter, out the other side you should get air that has, for example, 85% fewer 1-3µm particles. Purifiers, then, should reduce particle concentrations exponentially and we should see measured pm2.5 levels decrease by a constant fraction each minute.

I used a Coway AP-1512HH Mighty (the Wirecutter's top pick) and ran it on 'high' five times, tracking p2.5 levels: 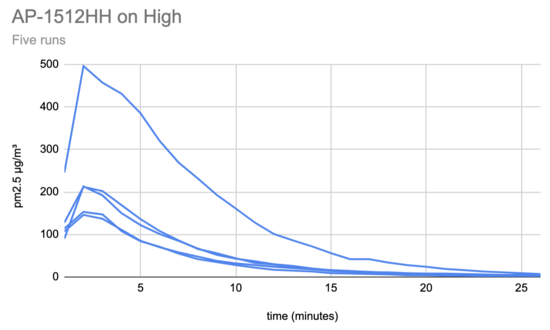 Eyeballing these, the initial decrease from the peak is lower than you'd expect from the rest of the curve. I think this is partially a measurement artifact: the meter is recording once a minute, and it isn't able to identify the true peak. The highest reading we get is going to be from a minute that included some amount of increase in smoke and also some amount of decrease. Additionally, at the beginning the smoke and cleaned air are still evening out around the room. Let's skip the very beginning of each curve and normalize by counting the highest included measurement as 100%: 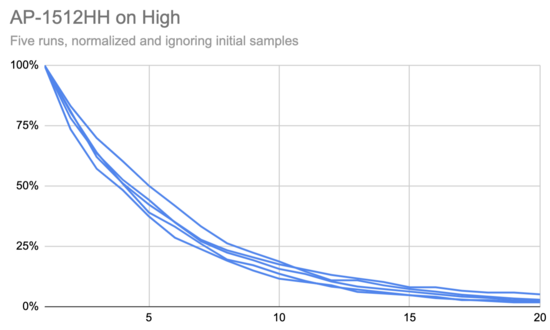 How close is this to exponential decay? Let's look at the minute-over-minute decreases across the five runs: 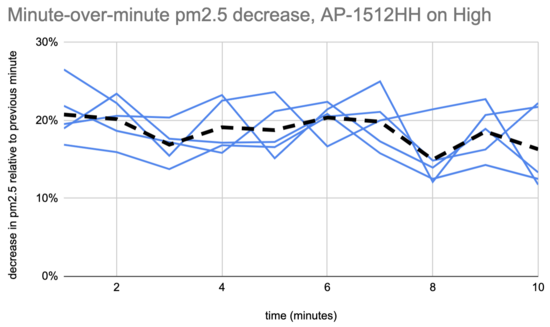 With perfect exponential decay we would see horizontal lines. It's a bit noisy, but instead I think we are seeing a general decrease, from ~21% initially to ~16% after ten minutes. This makes some sense: we are taking these measurements in a furnished room, with some obstructions to airflow. Some of the air will flow freely and most of the particles we are removing at first will come from that air. Other air will be in more awkward places, like under the bed, and smoke particles there will only gradually make it out into the general flow to be cleaned.

This allows us to compare two different purifiers (or, in this case, the same purifier on two different settings). Here's the chart above, with the addition of five runs on 'medium': 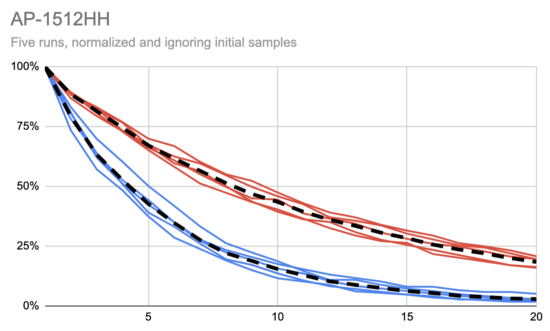 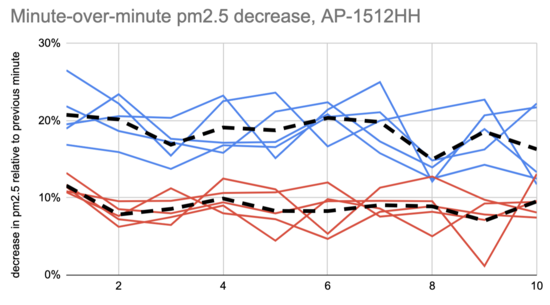 It looks like 'high' is moving pretty close to twice the air as 'medium'.

To calculate the CADR, I think we should use the initial somewhat steeper decrease, because that is closest to what you would get in the kind of empty room that is used for manufacturer CADR testing. We should probably also treat the room as if it's a bit smaller, to include the effect of some of the air being in hard-to-clean places, but I'm going to ignore that here. I got 21% for the AP-1512HH on 'high': how do I turn that into a CADR?

Here's the room I was testing in: 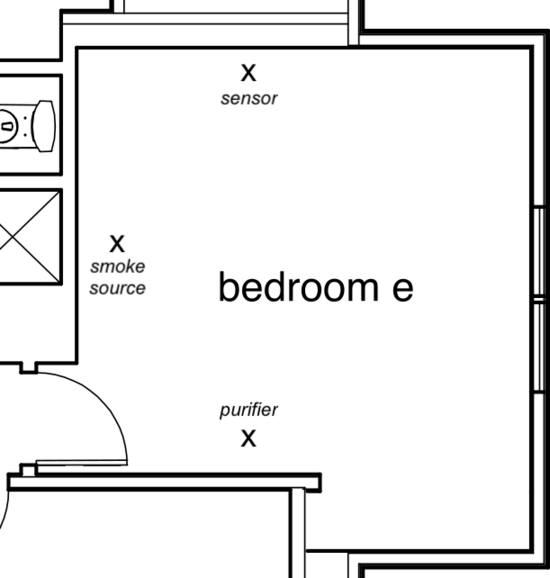 It isn't rectangular, but I estimate it's 1,200 CF. Taking 21% purification per minute I get a CADR of 252 CFM (1,200 * 21%). It's rated for a smoke CADR of 233 CFM, so this approach seems reasonably well calibrated. I'm also primarily interested in relative results, so I can test DIY purifiers, so this is more than good enough for my needs.