This weekend I was in San Luis Obispo for a gig, about halfway between SF and LA. It's possible to fly into SBP, but since I was traveling with two of my kids it was a lot cheaper to fly into SFO and drive down, and only slightly slower.

I'm signed up with Hertz's reward program ("Gold") and one of the benefits is that you pick out your own car. When I got to SFO, there were several Tesla Model 3s in the "Gold" area. This was somewhat surprising—I had only paid for a small sedan ("B") and the Teslas are fancy ("E7")—but it seemed like it would be interesting to try one out and I liked the idea of not paying for gas. I got us loaded up but when I got to the exit the attendant didn't believe I'd gotten the car from the designated area, and said it would be a $50/day upgrade. I went back to the area, identified an apparently identical Model 3, and asked if I could have that one. They said yes, I moved kids and luggage over, and we were off. 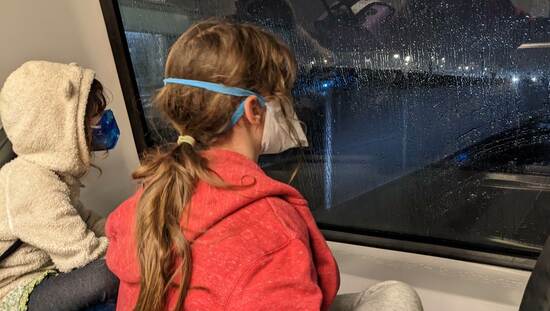 I forgot to take a picture of the car—what sort of review is this?—but here's a picture of my kids enjoying the best seats on the SFO people mover.

This was my first time driving an electric car and the first thing I noticed was lifting your foot off the accelerator is very different. In a gas car you coast, slowing down a little from engine braking, but apparently in EVs you get regenerative braking. There's a sense in which this doesn't matter, and is just a question of where to put the "coast" point—at no pedal vs pushing down a little—but it doesn't immediately seem better to me.

The first evening was a short drive to San Jose. Getting out of the car, it was not obvious how to turn it off. Reading online later I learned that all you do is walk away, which is nice and automatic. But you'd only know if someone told you or you looked it up, and late at night after a cross country flight with two tired kids while poking at unfamiliar menu options on the dashboard tablet I was pretty frustrated with their minimally discoverable approach.

The next morning I was looking for somewhere adjacent to a charging location to get breakfast along my route. This seems like something the built-in navigation should help with; charge + activity seems like a common kind of goal. Unfortunately, it would only let me search for one thing at a time. Google Maps on my phone was better, letting me search for 'superchargers' along my route, but then I needed to manually scroll around each looking for potential breakfast spots. I ended up finding a supercharger location next to a Denny's, after about 5min. This is a very good fit for software.

Finding charging locations was relatively easy, which is part of what made the optimization problem above tricky. Driving up and down CA is there are plenty of superchargers.

As we drove on it started to rain, and the automatic windshield wipers were convenient. Unfortunately, I occasionally wanted to manually trigger them, maybe because spray on the windshield didn't reliably affect the sensor, and the only way I could see to do that was to poke at the tablet in a way that didn't seem very safe to do while driving.

I had a much harder time keeping the car at the speed I intended than I'm used to. It might've been that the speedometer isn't in your main field of view (upper left corner of the tablet) or that there were no engine noises that varied with speed. When I wasn't driving, I looked up how to use the cruise control (the "Traffic-Aware Cruise Control", without Autosteer, FSD, etc), which basically solves this problem. This is another case where I was frustrated with the poor discoverability caused by their minimalist aesthetic decisions.

The adaptive cruise control mostly worked well, keeping me at a constant speed on an open road, and smoothly keeping pace with the car in front of me when there was one. When I pulled into an adjacent lane after following a slow car it would carefully bring us back up to speed, unlike some other cars where you get "I'm 20 mph below setpoint, better floor it!"

The major downside of the cruise control was phantom braking. In about 450mi of driving up and down CA 101 I has three false positives, where we suddenly decelerated:

I haven't experienced this in other cars with adaptive cruise control. I don't want to be too hard on Tesla here, false positives are a lot better than false negatives, but that only goes so far. If we very roughly figure that driving at full speed into another car happens about once in 75M miles [1] then we have roughly ~500k incidences of phantom breaking per accident that could have been avoided this way. If even 2 in 1M of those phantom braking episodes result in a rear-ending death, which seems plausible then the system would be safer turned off. And that's assuming it has no false-negatives, which it does.

Overall it was ok and I'm glad I tried one, but in the near future I expect I'd get a regular car instead. I saved about $65 in gas, but couldn't always use the charging time well and didn't like the phantom braking. If chargers keep getting faster or the phantom braking gets fixed, though, I could see renting a similar car again.


[1] I'm using 13 deaths per billion miles travelled as a proxy here. Not all deaths are from this kind of head-on collision, not all cars are single-passenger, and not all head-on collisions kill someone, but it seems good enough for an order-of-magnitude estimate.