After Brandon posted a map of places in one state named after other states, I was curious which states are the most popular. I had some guesses: lots of Washington because of the president, older and bigger states more heavily represented, but I wasn't very confident in any of it. So I downloaded the list of domestic names from the USGS to find out. [1]

No matches for: Hawaii, Massachusetts, Mississippi, New Jersey, North Carolina, North Dakota, South Carolina, South Dakota. The Dakotas and Carolinas make sense: if you consider them without "North" or "South" you get 9 for "Dakota" and 16 for "Carolina". You could think "New Jersey" is just suffering because it has "New," but "New York" did fine. Still, I can see why people don't want to name their town "New Jersey," and "Massachusetts" and "Mississippi" are kind of awkwardly long, but why not "Hawaii"? That's a nice place, and "Alaska," equally recent, has six towns including two in PA.

If people aren't naming their towns "Massachusetts" are they at least honoring our excellent state in naming their children? The Social Security Administration provides names for people born since 1880, where at least five people were given that name and gender that year. Doing the same calculation we get:

Because first names can't have spaces, the ten states with two-word names aren't included. But again if we break out "Dakota" and "Carolina" we get 108,013 and 39,348 respectively, so they would be up there.

How well do these two measures of popularity correlate? 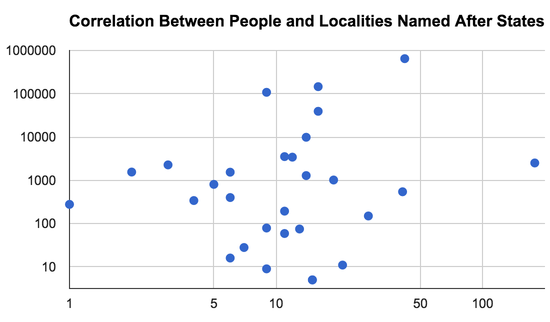 Not very well. Except everyone agrees not to name things "Massachusetts".


[1] Following Brandon, I filtered out anything containing "trailer," "historical," or "mobile home". Unlike Brandon I required whole-word matches, so Bidahochi AZ would not be counted towards Idaho.

←
Emacs Keybindings in Chrome Without Gnome Pricing Benefiting Everyone
→