In February I decided to start running more. The main idea is, I need to go between my house and the train station anyway, so might as well use that time as exercise. Initially I was trying to run as fast as possible every time, but since then I've relaxed to always running but only a few times a week going for maximum speed. Now, this is on sidewalks and with a backpack on, so I'm not going to set any records, but I've definitely gotten faster the more I've done it. Evolution of my fastest times: 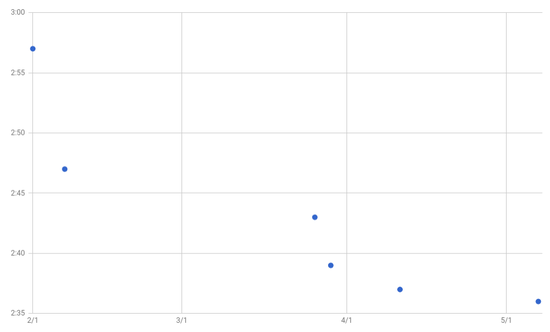 It looks like I'm leveling out, and only improving by about a second a month at this point. On the other hand, my running is more uniform: I rarely take more than 5s more than my most recent best time, when initially I would sometimes take 20s more. I think that's mostly down to having a better sense of pacing.

Trying to beat personal records is very motivating, though, especially when there are round numbers coming up that I'd like to break.

Update 2018-12-11: I've stopped having any days where I run going for maximum speed trying to beat my best time, because I found I was pushing myself too hard and hurting my knees. During the summer, on very hot days, I walked the distance. Now that it's cooled off again I'm back to always running. I find keeping my coat in my backpack so I'm cold is good motivation for running, as is pushing myself to run barefoot even as it gets colder (though I switched to shoes in mid-October).