I was waiting in the airport security line at Logan, and they have a big row of banners for Boston's championships in various sports. Kind of like this: 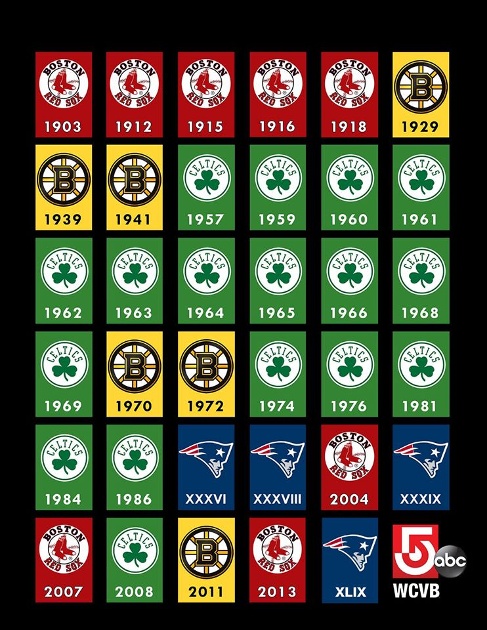 What stood out to me, seeing this, is (a) it looks like Boston used to have one good team at a time and (b) there used to be more times where one team would win many times in a short period. How general are these? Do they hold in other cities? Now, (a) is hard to look at because I don't know how to categorize teams by city properly, but I can look at (b) across cities without too much work. What does that look like?

This is a graph of repeat wins by year; for each year, how many of the four years previous did this team win the championship?

Update 2015-11-06: The basketball graph was wrong before, here's the right graph. The original, which showed the winners of the western division, is here.

Now, I had all sorts of theories that someone who knows very little about sports might make up, like "maybe free agency rules changed, and now after a team wins a championship they loose all their good players to other teams". But it doesn't actually look like things have changed much over time. Maybe there's less in hockey and baseball than there used to be, but it's pretty rough. Oh well.