Back in January there was a bunch of buzz around using standard rapid tests but swabbing the throat. Ex:

On one side are well-regarded experts who argue that swabbing your throat in addition to your nose may increase the chances that a home test can detect omicron. On the other side are similarly well-regarded experts, including those at the Food and Drug Administration, who urge Americans to avoid experimenting with kits that were developed and tested using only nasal swabs.
—Washington Post, 2022-01-06

if you want to know if you have infectious Covid-19, you need to use throat swabs. It's still not 100% sensitivity or anything, but it's a lot better, whereas nose swabs are useful but in no way all that reassuring.
—Zvi, 2022-01-13

Then the buzz died down, and it seems like everyone just forgot about it? No clear recommendation either way, just a lot of Tweets, a few blog posts, news stories about the controversy, and then not much else. Google Trends shows the spike and drop-off: 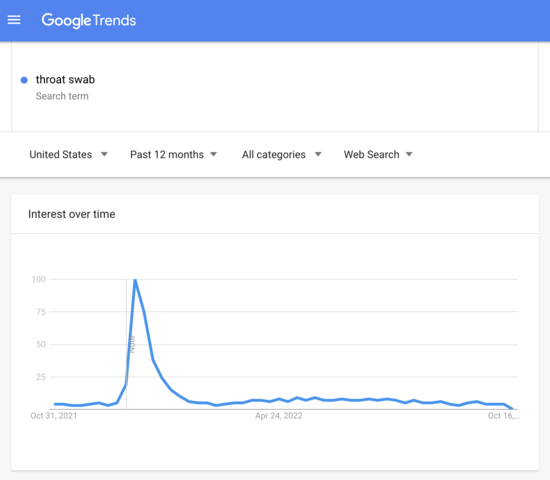 [EDIT: I wouldn't read too much into the chart: it turns out that most covid-related keywords followed as similar trend, as did covid itself]

What happened? Why did we all stop talking about it, without what seems like any firm conclusions? Some of this is maybe that there were conflicting studies: Schrom et. al. posted a preprint on 2022-01-19 (published version) where it looked like it worked poorly, but Goodall et. al. posted a different preprint on 2022-01-21 (published version) where it did look good. I also saw speculation that some of the cases where people got a negative with nasal swabbing but a positive with throat swabbing may have been false positives—rapid tests are sensitive to pH, and especially if you've been eating or drinking recently your throat might be pretty far from neutral.

Ten months later, why hasn't this settled out into recommendations that either say to swab throat and then nose, or that seem to have considered the new evidence and say still don't? We're doing a lot of testing, and if this is a better way to be using the tests we already have it would be great to know! Does anyone whose been following this have a better understanding of what happened?

←
Electric Kettle vs Stove How Risky Is Trick-or-Treating?
→