I've been reading the excellent blog do the math, which uses simple physics and estimation to look at future options. In a recent post he argues that once fossil fuels start their decline [1] we will have a major problem:

once we enter a decline phase in fossil availability fuel -- first in petroleum -- our growth-based economic system will struggle to cope with a contraction of its very lifeblood. Fuel prices will skyrocket, some individuals and exporting nations will react by hoarding, and energy scarcity will quickly become the new norm. The invisible hand of the market will slap us silly demanding a new energy infrastructure based on non-fossil solutions. But that's the rub. The construction of that shiny new infrastructure requires not just money, but energy. And that's the very commodity in short supply. Will we really be willing to sacrifice additional energy in the short term -- effectively steepening the decline -- for a long-term energy plan?

It would be good to read the whole thing; he talks about how the long term nature of our energy technology (you have to build power plants, this takes a while, then it lasts a while) makes shifting to alternative energy sources very difficult once we've passed the peak for fossil fuels.

One answer is that we need to start building replacement infrastructure before peak, and we need to build a *lot* of it. I think it's good that india and china are building thorium [2] reactors.

Another answer, that I don't know of anyone proposing, would be some sort of investment fund that bought cheaply extractable oil with the plan to keep it in the ground for decades until the price of oil was very high. I don't know if the market for oil works this way: I think it mostly doesn't. Maybe you lease the right to extract oil? You could also do this with a government choosing to wait to extract oil. I think the 10bbl in ANWAR may be like this: it's politically unpopular to extract it now, but when oil gets very expensive it will be sitting there.


[1] The same author has a good post on peak oil that includes this graph: 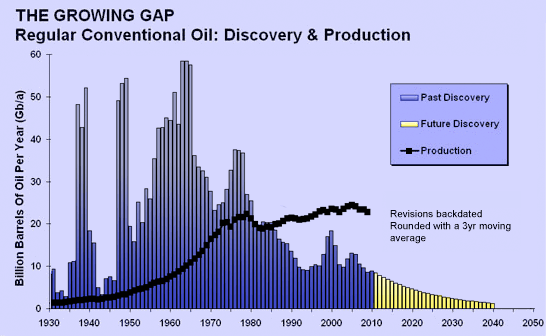 [2] Instead of running a nuclear reactor on uranium you can run it on thorium. The united states looked at both in the 60s, but ended up going with uranium because that makes it easier to get plutonium for weapons. Advantages of thorium include that it doesn't make plutonium, that the waste becomes safe sooner (though still hundreds of years), that it's harder (some say impossible) for them to melt down, and that thorium is much more abundant than uranium.