On saturday I went to haymarket, boston's wonderfully cheap outdoor produce market. The quality is variable, but this week they had pretty good peaches (buy one for a quarter, if it's good buy a bunch more). I bought a lot more than we could eat in a week, planning to make peachcicles: little bits of frozen peach, that you eat frozen on a hot day. 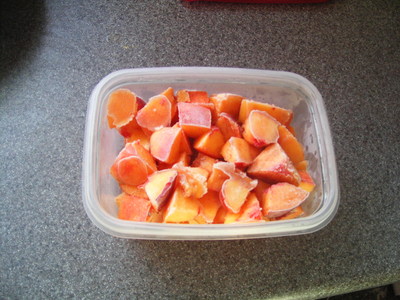 Let the peaches sit until they are as ripe and juicy as they will get. It's ok if the texture starts to go downhill a little because you're going to eat them frozen. You're going for maximum flavor. Then wash them and cut them small (32ish pieces). Freeze them in two stages, so that they're not all stuck together. First, put them on baking sheets with enough separation that you'll be able to brak them apart later if they get stuck. Pretty spread out. You can do mulitple layers on one sheet by separating with foil or something. Freeze for at least six hours, though longer is fine. Then put them into a bag and freeze until wanted. Serve right out of the freezer.

←
Keyboard Keys Should Be Tiny Touchpads Wharfing Out, Porching Out
→