Some friends on Facebook are passing around this chart comparing NC teacher pay to that of surrounding states: 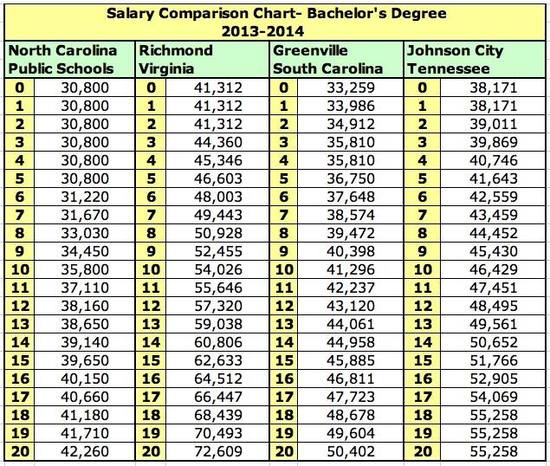 You can see, for example, that at step 0 a North Carolina teacher with a BA is making $30,800 while a Richmond teacher makes $41,312, 34% more. The NC teacher needs to get to step 19 before they start making what that Richmond teacher made in step 0. This is nuts!

Except there are a few problems. The biggest one is that they're comparing the pay scale for the state of North Carolina with the scales for specific surrounding cities. The way NC handles salary for public schools is there's a base rate, and then individual districts can optionally pay more. If we want to compare the pay in NC with surrounding states, a better comparison would be on a whole state basis.

The other major problem with the chart is an inconsistent definition of a "step". You might think this represented something like "years of experience," and they do mean this on the North Carolina chart, but on the Richmond chart "step 20" corresponds to 38+ years of experience. [1]

What happens if we redo this comparison, and just look at state-wide averages for those four states? Taking the numbers from another chart by the same FB group we have:

North Carolina is behind its neighboring states in terms of teacher pay, but by far less than you'd think from the initial chart.


[1] In fact, the official numbers for NC also use a "step" system, with years 0-2, 3-5, etc. To be fair, though, the people putting the chart together may have gotten their data from somewhere else that broke things out by years of experience.