The Nomic game has ended, with David (dchudz) the winner: 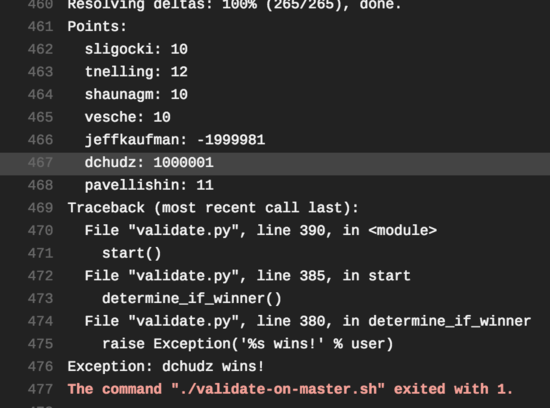 Since the last update a week and a half ago we made some good progress:

After David quit, I told him about a bug I'd realized there was with points transfer where nothing kept you from going arbitrarily negative. I imagined making a sock puppet account, and applying to join the game, but it seemed too likely that people would realize the account didn't have a proper history and reject the join PR. David proposed we flip a coin, and the loser transfer 100k+ points to the winner.

David had resigned (#67), so he started with a PR to re-add himself (#80). He then realized that the points-transfer PR rule would allow adding players without approval from everyone else, and we didn't need to wait for that to merge. We flipped a coin, he won, he created #82, and I approved it. Which won the game for him: #83.

You could argue (and I bet someone will) that I shouldn't have followed through with my promise once the coin flip came out in David's favor, but that's not how I play games (except diplomacy).

After thinking this through, this showed that any of us could have won unilaterally:

If we had fixed the bug where points could go negative we'd still have a problem, it's just more annoying:

I'm not sure at this point whether we'll fix the bugs and keep playing, or decide we're done. Are people are interested in playing more?

Another question is how I should leave the repo when we are fully done, so other people can fork it and start playing? There are kind of two schools: