New Jersey has very strange rules determining who has the right-of-way at rotaries / roundabouts when there aren't signs to clarify:

There are no set rules for driving into, around and out of a traffic circle in New Jersey. Common sense and caution must prevail at all times. In most cases, the circle's historically established traffic flow pattern dictates who has the right-of-way. If a major highway flows into and through the circle, it usually dominates the traffic flow pattern and commands the right-of-way. Traffic control signs, such as stop or yield signs, at the entrances to the circle also govern which motorist has the right-of-way. Never enter a traffic circle without checking all signs and determining the intentions of the motorists already moving within the circle.

Whenever a motorist is in doubt concerning who has the right-of-way in a circle, he/she should exercise extreme caution and remember the basic rules governing any uncontrolled intersection: The vehicle to the left yields the right-of-way to the vehicle approaching from the right.

Having right of way depend on the "historically established traffic flow pattern" means that anyone who approaches an unfamiliar one doesn't know what the rules are. Which is definitely not how you should set up your traffic system!

Additionally, the second paragraph says drivers already in the rotary should yield to drivers entering, which is the opposite of the system everyone else has standardized on.

I encountered this several years ago, but at the time the only source I found was a dead link from Wikipedia. NJ has revised their manual, however, and post of the 2020 version, so I've updated Wikipedia.

On top of all that, NJ is apparently so embarrassed about this that they won't allow you to copy text from the manual: 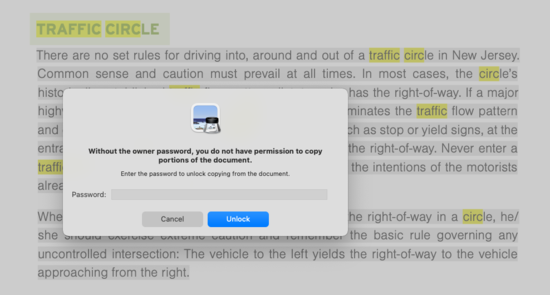 If I were in charge of this for NJ, I would announce that we were going to switch to the standard "entering traffic yields" system in some number of months, and ask people to submit any locations that should be considered for alternative signage ahead of that change.