Colombia has had high inflation for decades, averaging ~14% yearly since the 1950s. Talking to our au pair, who's from Medellin, one way Colombians have adapted to this is by tying many things to the minimum wage. For example, you might have a job that pays "five minimum wages," and whenever the government increases the minimum your employer proportionally increases your pay as well. If you look at presentations of the minimum wage they include a table of multipliers so people know what this means for them: 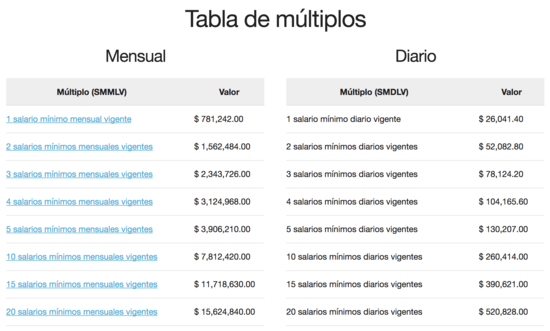 Trying to read more about this, I found an article saying:

Which I would very rustily translate as:

When the minimum wage goes up so do, for example, collision insurance (SOAT), health insurance premiums and copays (EPS), traffic fines [?], and pension contributions.

I'm used to the idea that some things would be tied to measurements of inflation, but attaching the increases instead to something explicitly under government control seems like it gives the government a powerful way to shape the economy. Similar to adjusting interest rates.

I'd really like to learn more about this system and how it works in practice, but I haven't been able to find anything in English (and my Spanish isn't good enough to see otherwise). For example, I would expect the politics around the decision of how much to raise the wage to be even more complicated than they are here in the US, since it affects so much more of the economy. And how much really is tied to the wage? Is it a few things or mostly everything? Does anyone know more about how this works?

Working on an emergency timetable for regional rail has made it clear how an environment of austerity requires tradeoffs that reduce efficiency. I already talked about how the Swiss electronics before concrete slogan is not about not spending money but ab…

Fireside this week, but next week we are diving into our long awaited series on pre-modern textile production, though we will be particularly focused on the most important clothing fibers in the Mediterranean world, wool and linen (rather than, say, silk …

via A Collection of Unmitigated Pedantry February 26, 2021

The Troubling Ethics of Writing (A Speech from Ancient Sumer)

(Translated from a transcript of an ancient Sumerian speech by Uruk's most well-respected Scriptological Ethicist) Writing is a profoundly dangerous technology: Access to writing was initially, and still remains, uneven. What's worse, the rich are m…