My facebook feed is full of people talking about Monsanto killing Monarch butterflies, and asking people to sign a petition. The petition reads:

The Monarch butterfly population in North America has been shrinking at an alarming rate because a significant portion of their breeding habitat is being destroyed by herbicides used on genetically engineered (GE) crops. Milkweeds are critical to the Monarch's survival because they are the only plants Monarch larvae will eat, but they are being decimated by the rampant use of Roundup (glyphosate) used in conjunction with Monsanto's Roundup Ready GE crops.

To protect Monarchs we must protect their critical habitat. I urge the U.S. Environmental Protection Agency, U.S. Department of Agriculture and President Obama to protect Monarch butterflies by stopping the approval of Monsanto Roundup Ready and other glyphosate-resistant and pesticide-promoting genetically engineered crops.

From this description you might think Monsanto is selling chemicals that are leeching out into the environment like DDT and killing all the milkweed in the woods or marshes, but that's somewhat misleading. Farmers have always killed the weeds on their farms, trying to grow only their crops, but before the mid 1990s killing all of the weeds wasn't practical. Then Monsanto developed a kind of soybeans that were resistant to the herbicide glyphosate, which meant farmers could plant this glyphosate-resistant soy, spray with glyphosate, and kill everything but the soy.

Even including the increased cost of the seeds [1] this is was much more efficient than previous weed-control methods, and 90% of the US soy crop was grown with this method by 2007. With the development of other glyphosate-resistant crops, especially corn, a large fraction of Midwest crop land is now regularly sprayed with glyphosate. Because much of the milkweed available to Monarchs was growing as weeds on these fields, there's now less available for Monarch eggs and larvae. The overall decrease in Midwest milkweeds seems to have been around 58% (2012, pdf) from 1999 to 2010.

This does seem to be decreasing the number of Monarchs. The Monarch population east of the Rockies migrates to Mexico every fall [2] and researchers measure (2011) the area they occupy as they spend the winter: 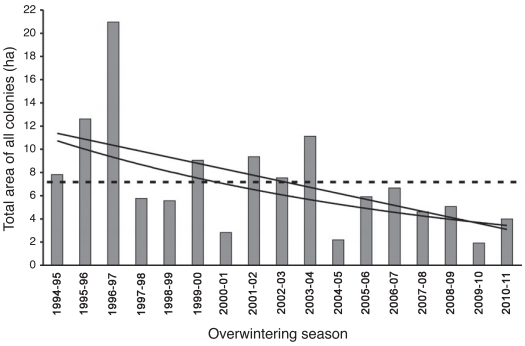 So if the switch to spraying whole fields with glyphosate has led to fewer Monarchs, what should do we do? Perhaps we should switch back to the older method?

One comparison that might be informative would be the case of corn and geese. Corn used to be picked by hand, which was labor-intensive but also very reliable in that almost no corn was missed and left on the fields. When mechanical corn pickers came into widespread use in the late 1940s costs went down but waste went up, because the machines weren't quite as thorough as the humans. This meant there was more edible corn remaining on the harvested field, which provided lots of corn for migrating birds and other animals, and with more food available their populations have increased.

Imagine an inventor were to come along with a new machine that would get us back to the early 20th century levels of harvest efficiency. Corn farmers would like this, but the populations of these birds and other animals that now rely on this corn would probably fall a lot. Would you sign a petition to ban this machine?

Alternatively, imagine the relative costs of labor and machinery changed to where it made sense to go back to picking corn by hand. This would have a similar effect on animal populations as improved corn-picking machines. Should hand-picking corn likewise be banned?

There are many situations in which animals adapt to human behavior, and farming offers a lot of inefficiencies for them to exploit. If we decided to never make changes to human practices that would affect animals negatively we would be locked into many wasteful practices. When considering a change, then, the question isn't "does this harm animals?" but "on balance does this do more harm than good?" The petition doesn't make an argument along these lines at all, which is common in environmental advocacy, but leaving out the "benefit" portion is skipping half the discussion.


[1] The original glyphosate-resistant soybeans, MON 04032, are under patent until 2015, though most people now are using the newer variety, MON 89788, which are supposed to have higher yields.

[2] The way they do this is fascinating. While the butterflies make a huge annual migration, no individual butterfly makes it the whole way. Each butterfly lives only a few months as a flying adult, which means each one makes only about 1/4th of the cyclical migration. How they manage to consistently return to the same small regions last visited by their great-grandparents is not fully understood.