When you share a link on social media the platform fetches the page and includes a preview with your post: 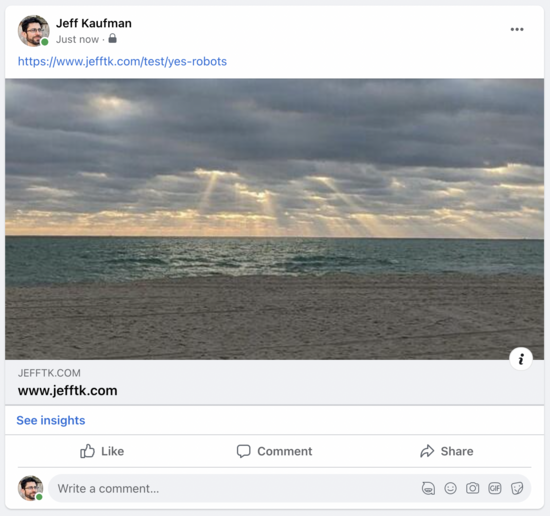 Even though this happens automatically the system doesn't obey the robots.txt exclusion rules (RFC 3909): I have /test/no-robots excluded in my robots.txt but that doesn't stop it: 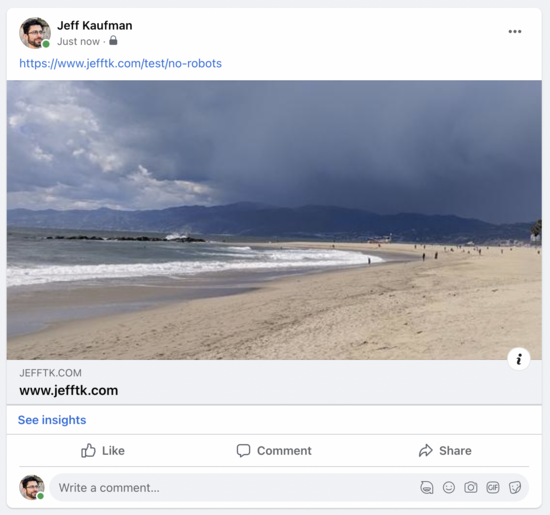 I don't even see a request for robots.txt in my logs. But that's actually ok! The robots exclusion standard is for "crawlers", or automated agents. When I share a link I want the preview to be included, and so the bot fetching the page is acting as my agent. This is the same reason why it's fine that WebPageTest and PageSpeed Insights also ignore robots.txt: they're fetching specific pages at the user s request so they can measure performance.

This puts Mastodon in an awkward situation. They do want to include previews, because they're trying to do all the standard social network things, and if they respected robots.txt many sites you'd want to be able to preview won't work. They also don't want the originating instance to generate the preview and include it in the post, because it's open to abuse:

The approach Mastodon has gone with is to have each instance generate link previews for each incoming link. This means that while having a link shared on Twitter or Facebook might give you one automated pageview for the preview, on Mastodon it gives you one for each instance the link is federated to. For a link shared by a widely-followed account this might mean thousands of link-preview requests hitting a server, and I'd also now consider this traffic to be from an automated agent.

I'm not sure what the right approach is for Mastodon. Making the link preview fetcher respect robots.txt (Issue 21738) would be a good start. [1] Longer term I think including link previews when composing a post and handling abuse with defederation seems like it should work as well as the rest of Mastodon's abuse handling.


[1] Wouldn't that just add an extra request and increase the load on sites even more? No: everyone builds sites to make serving robots.txt very cheaply. Serving HTML, however, often involves scripting languages, DB lookups, and other slow operations.