There's recently been some discussion around how people new to dancing find Larks/Ravens terms as compared to Gents/Ladies, and someone recently wrote to me asking what I'd seen. I started writing a response just to them, but it seemed general enough for a post.

BIDA switched to Larks/Ravens two years ago after about eight years of Gents/Ladies. While to experienced dancers Larks/Ravens was a change, to newcomers that's just the way the dance is.

Things mostly seem pretty similar to before the change: we still have lots of newcomers and not that many come back and become regulars. Attendance is pretty noisy but doesn't seem to have been affected: 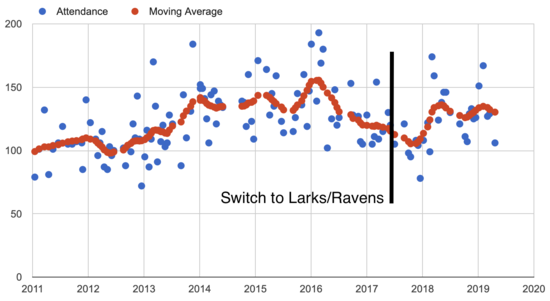 I have noticed some smaller changes, though:

I was curious whether I could also look at this quantatatively. Are newcomers more or less likely to come back now? We give out passes to new dancers who arrive in time for the workshop which let you get in free at a future dance. I thought I'd graph the numbers for "people admitted for free" from our attendance spreadsheet, which is generally redemption of these passes, and should be a rough proxy for propensity to return: 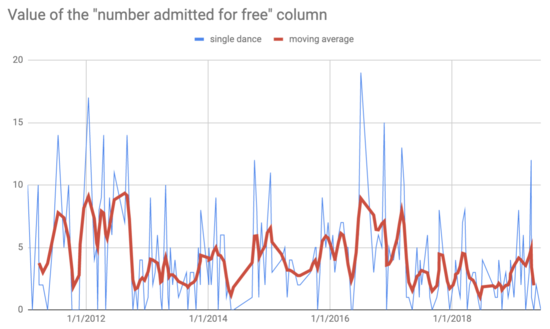 Unfortunately, I think this data isn't very useful. The sharp drop after the 2012-09-16 dance was due to us switching from "first time free" to "second time free", so that makes sense. But looking back over our board emails, the other times it's been higher have often been times when door volunteers have been admitting newcomers for free, either because they misunderstood the policy or the hall manager training them did. The sharp drop at 2017-04-16 is suspiciously close to when we started trying Larks/Ravens, but it's before we made the switch. It's also a dance where we had a lot of board members around (annual meeting) so I think the most likely thing was that this was one of the times when we noticed people were being admitted free when they shouldn't be. It seems like this data isn't good enough to give us useful insight into whether newcomers are more or less likely to come back.

Overall I haven't noticed large changes, and newcomers still seem to generally do about as well as they did before. The "Larks on the left, Ravens on the right" alliteration seems somewhat helpful, but not a large difference. While some experienced dancers in communities that are considering Larks/Ravens have worried that it will be harder for newcomers, that's not what we've seen. On the other hand our dance already had a lot of people dancing whatever role they wanted, and at a dance with a strong male-Gent/female-Lady culture I do think things would be different.

←
Standing Offer: Contra Music Feedback Where are the new instruments?
→