I've been logging my happiness for a year now. [1] My phone notifies me at unpredictable intervals, and I respond with some tags. For example, if it pinged me now, I would enter "6 home bed computer blog". I always have a numeric tag for my current happiness, and then additional tags for where I am, what I'm doing, and who I'm with. So: what's working, what's not?

When I first started rating my happiness on a 1-10 scale I didn't feel like I was very good at it. At the time I thought I might get better with practice, but I think I'm actually getting worse at it. Instead of really thinking "how do I feel right now?" it's really hard not to just think "in past situations like this I've put down '6' so I should put down '6' now".

Being honest to myself like this can also make me less happy. Normally if I'm negative about something I try not to dwell on it. I don't think about it, and soon I'm thinking about other things and not so negative. Logging that I'm unhappy makes me own up to being unhappy, which I think doesn't help. Though it's hard to know because any other sort of measurement would seem to have the same problem.

There's also a sampling issue. I don't have my phone ping me during the night, because I don't want it to wake me up. Before having a kid this worked properly: I'd plug in my phone, which turns off pings, promptly fall asleep, wake up in the morning, unplug my phone. Now, though, my sleep is generally interrupted several times a night. Time spent waiting to see if the baby falls back asleep on her own, or soothing her back to sleep if she doesn't, or lying awake at 4am because it's hard to fall back asleep when you've had 7hr and just spent an hour walking around and bouncing the baby; none of these are counted. On the whole, these experiences are much less enjoyable than my average; if the baby started sleeping through the night such that none of these were needed anymore I wouldn't see that as a loss at all. Which means my data is biased upward. I'm curious how happiness sampling studies have handled this; people with insomnia would be in a similar situation.

Another sampling issue is that I don't always notice when I get a ping. For the brief period when I was wearing a smartwatch I was consistently noticing all my pings but now I'm back to where I sometimes miss the vibration. I usually fill out these pings retroactively if it's only been a few minutes and I'm confident that I remember how I felt and what I was doing. I haven't been tagging these pings separately, but now that I think of it I'm going to add an "r" tag for retroactive responses.

Responding to pings when other people are around can also be tricky. For a while there were some people who would try and peek and see what I was writing, and I wasn't sure whether I should let them see. I ended up deciding that while having all the data eventally end up public was fine, filling it out in the moment needed to be private so I wouldn't be swayed by wanting to indicate things to the people around me.

The app I'm using isn't perfect, but it's pretty good. Entering new tags is a little annoying, and every time I back up the pings it forgets my past tags. The manual backup step also led to some missing data—all of September 2014 and some of August—because my phone died. This logging data is the only thing on my phone that isn't automatically backed up to the cloud, so when my phone died a few weeks ago I lost the last month of pings. [2] So now there's a gap in the graph.

While I'm not that confident in my numeric reports, I'm much more confident in the other tags that indicate what I'm doing at various times. If I'm on the computer I very reliably tag 'computer', etc. I haven't figured out what to do with this data yet, but it should be interesting for tracking behavior chages over time. One thing I remember doing is switching from wasting time on my computer to on my phone; let's see what that looked like: 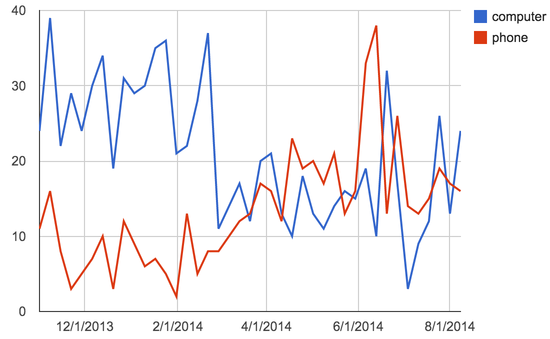 I don't remember why the big drop in computer use at the end of February 2014 happened. I assumed at first it was having a baby, after which I spent a lot of time reading on my phone while she was curled up on me, but that wasn't until a month later. I think this may have been when I realized that I didn't hate the facebook app on my phone afterall? I'm not sure. The second drop in both phone- and computer-based timewasting, the temporary one in July 2014, was my being in England. My phone had internet but my computer usually didn't. And there was generally much more interesting stuff going on around me than my phone.

Overall my experience with logging has made me put less trust in "how happy are you right now" surveys of happiness. Aside from the practical issues like logging unexpected night wake-time, I mostly don't feel like the numbers I'm recording are very meaningful. I would rather spend more time in situations I label higher than lower on average, so there is some signal there, but I don't actually have the introspection to accurately report to myself how I'm feeling.

Update 2015-04-27: I eventually decided that answering pings was annoying me, and stopped collecting data. I've uploaded the last data, final ping was the evening of 2015-03-28.

[2] Well, it was more my fault than that. The phone was partly working and I did a factory reset to see if that would fix it (it didn't) and I forgot to back up pings first.