Here are two different ways you could figure out how much a 2-bedroom apartment costs: These two methods seem to get dramatically different results. Why?

The Department of Housing and Urban Development calculates "Fair Market Rents" from Census data, which amounts to asking people what they pay for rent. They find that the 40th percentile rent for a 2br in Boston is $1,494/month.

On the other hand, if you look at the apartment listings on CraigsList you'll see basically no 2br apartments that cheap. Looking over all 2801 two bedroom apartments listed there [1] the 40th percentile is $2,250: 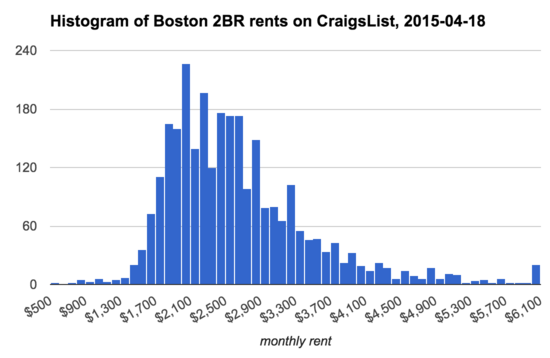 An apartment listed at $1,494 would be at the 1.6th percentile. How are these so far apart?

One possibility is that rents have recently risen a lot, and the HUD doesn't account for this well. What they do is take the 2005-2012 American Community Survey (ACS) data and adjust it forward to 2013 using the CPI, then adjust forward to 2015 assuming an increase of 2.3%/year ("trending factor"). So their base data is up to ten years out of date. To check this I'd like to see what listings looked like in 2005, but my oldest data for CraigsList prices for Boston area apartments is June 2011, with 1295 2br apartments: 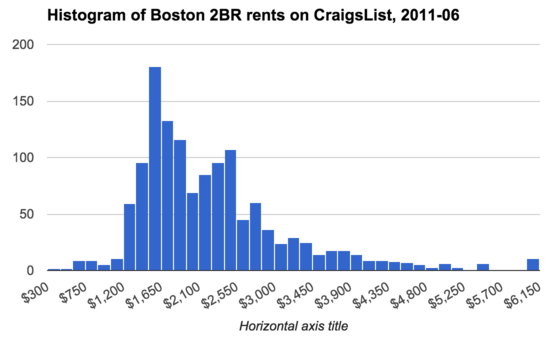 The 40th percentile rent then was $1,800, which is 25% growth over just under four years, or 5.7% annual growth. This is higher than the growth numbers they're using, but not enough to account for the whole difference. If we assume that their $1,494 2015 number comes from taking a 2005 number and adjusting it forward at 2.3%/year when they should have been using 5.7%/year, the revised 2015 number would still only be $2,071. That's 28th percentile in the CraigsList data. But with the ACS running 2005-2012 most of their data is more recent than 2005, so the actual error due to underestimating growth is significantly smaller. (If we assume 5 years instead of 10 then it's $1,759 or 9th percentile.)

And a last factor is that CraigsList represents what landlords are asking for, where apartments that are listed above market stay on the site while ones listed below market are quickly rented. This would push the CraigsList number high.

One way to resolve this would be to collect even more data! If you rent in the Boston area, what are you paying? Could you add your apartment to this public spreadsheet?


[1] I didn't do this manually: I scraped PadMapper, which buys data from 3Taps, which scrapes it from Google's cache, which got it from scraping CraigsList. There was a lawsuit.