I wrote before about how I wanted to make a midi footboard, something that would turn foot tapping into arbitrary drum sounds. I've spent the last week experimenting with designs, and I now have something that I think works well: 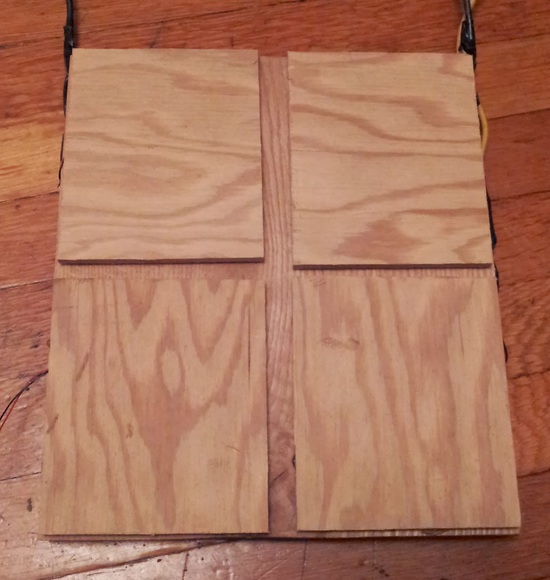 There are four sections, each of which generates a signal independently. The signals go into a drum module from an electronic drum kit which produces audio. It sounds something like this:

Each of the four sections is a 4"x5" piece of 1/4" plywood with a piezoelectric contact microphone epoxied to the center. To let the whole section vibrate together and prevent transferring the vibrations through to the other sections each has rubber around the edge. I cut the rubber from a peel-and-stick roofing corner and epoxied it to the wood. 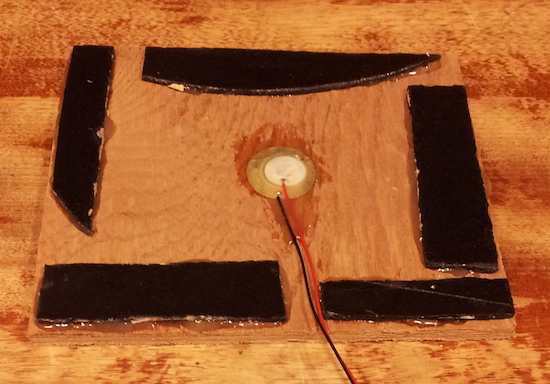 After the epoxy had dried overnight I peeled the protective backing off the rubber and stuck the sections to a backing board. The picture above is after peeling off the backing. If you're making one to be played with shoes you may want either larger sections or to put them farther apart. I also cut four more pieces of rubber and stuck them to the underside of the backing board so it doesn't slide around on the floor.

For a drum module I got a Yamaha DTX500. It converts the weak analog signals from the piezos into drum sounds, or midi if you like. So far I'm just using its built-in sounds. I had originally planned to build this piece, but after realizing that electronics are complicated and you can buy things that do exactly what I want relatively cheaply I just decided to get one. In retrospect I'm glad I did: I tried many different designs for the foot trigger sections and if I hadn't been confident in the electronics portion it would have been harder to end up with a good design.

Pretty much any drum trigger module should work for something like this. Others I looked at but ended up not getting (because of price) included the Alesis DM6 and Roland TD-6. All three of Alesis, Roland, and Yamaha make fancier drum modules with more options and less cramped interfaces, but I'm pretty happy with my entry-level DTX500.

Now I just need to learn how to play it.

←
Markov Me Bitcoin exchange rate as a prediction
→