While Julia and I aren't quite as penny-pinching as we used to be, we still do try to live frugally so we have more to donate. Reading Mr Money Mustache can be useful here: a coherent philosophy of saving money, combined with practical suggestions. [1] One idea is getting a Costco membership and going there quarterly to stock up:

Comparing the $401 Costco bill to a potential $690 Safeway bill means that I am saving 41% over the lowest prices I could find at Safeway—and this is over a huge swath of groceries. After subtracting the membership cost, I probably still save close to $1000 per year.

The general strategy of going to a really cheap place occasionally to buy lots of things that keep well is a good one, but I was wondering whether Costco in particular makes sense. Costco charges a membership fee, and our cheapest nearby supermarket, Market Basket, is pretty cheap.

(Market Basket is an interesting store: when the CEO got forced out in 2014 he was so popular among employees and customers that there was a huge strike/boycott. The company couldn't keep the stores stocked, they were losing a huge amount of money, and they ended up selling the chain to the former CEO. Really strong loyalty.)

To compare the two, we went to Costco and noted the prices for a collection of things that we would be buying there if we got a membership. This is a combination of dry goods that keep, canned stuff, and various things that we would freeze. We came in with a big list of all the things we might buy there if we could, but ran out of time and didn't end up getting prices for everything. This means our list is skewed toward meat and frozen things, since we went there first, even though we don't eat that much meat or frozen food. We generally buy whatever's cheapest, so most of these prices are store brand, except Cheerios where I don't think the generics are very good. [2]

Later I went through Market Basket, finding the items I'd priced at Costco. Everything below is $/lb unless specified otherwise:

We go through a pound of pasta a lot faster than a pound of basil, though, so I did a rough weighting by estimated annual usage (sheet), and on this collection of items Costco is $108/year more than Market Basket, not counting Costco's $55/year membership fee. 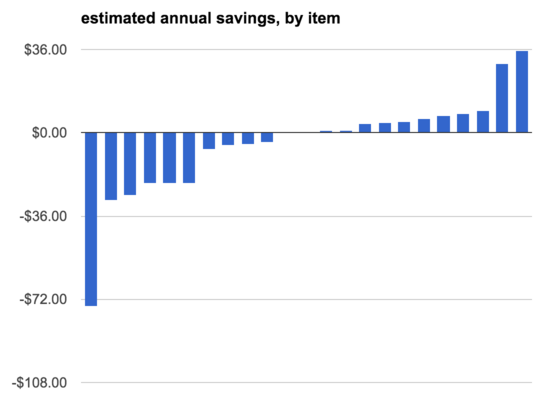 This is all very approximate because we didn't end up pricing enough things. If I had a very good sense of what the prices were I could buy the things at each store that are cheapest there, and on cashews and chocolate chips alone I'd pay for Costco's membership fee. We do already do something like this already by buying nuts at Star when we buy our perishables (Market Basket only has small expensive containers of nuts) and diapers at Target (they have a store brand). But without a bunch more work to figure out what to buy where my price sense won't be good enough to make up for the hassle of going to an additional store.


[1] A big place that it differs from our thinking is that it's based around trying to have as high a quality of life as possible while we're trying to maximize donations (while maintaining a pretty good quality of life). For example, if we moved to an area with a much lower cost of living I could probably cover our expenses with ~20hr/week of remote computer work, leaving us a lot more free time as a family. This would bring down all money numbers, in and out, but bring down money going out farther than coming in. Because I'm earning to give and Julia is doing a mixture of earning to give and working at a directly valuable job, however, this doesn't make sense for us.

[2] Costco's store brand is higher quality than Market Basket's, but we've been happy enough with the Market Basket food.

[3] Writing this, I remembered I was going to switch to cooking dry beans and freezing them. I just cooked 4lb beans ($1/lb) overnight in the slow cooker, with 1tbsp salt per pound. They became 7lb 4oz cooked and drained (people did eat some, but only a few ounces). To compare to canned black beans, you need to adjust for the canned ones coming in water. With water 11oz of my cooked beans became 16oz, so my 7lb 4oz should be equivalent to 10lb 6oz of of canned beans. So if canned ones are $0.69/lb, cooking dry ones is more like $0.38/lb.