Because earning capacity increases with age but enjoyment of spending decreases with additional money, standard economic theory predicts people will smooth their spending by borrowing to live beyond their means when young and paying it back when they're older. The idea is that you have some lifetime spending to split among all your future selves, so instead of having you-at-50 enjoy $45K/year of self-spending while you-at-25 struggles with just $20K/year, you should each spend $30K/year. [1] In practice, however, we mostly don't see people doing this, and I think that's actually very reasonable.

We can approximate your earnings over the course of your life by looking at how much everyone makes now, broken down by age: 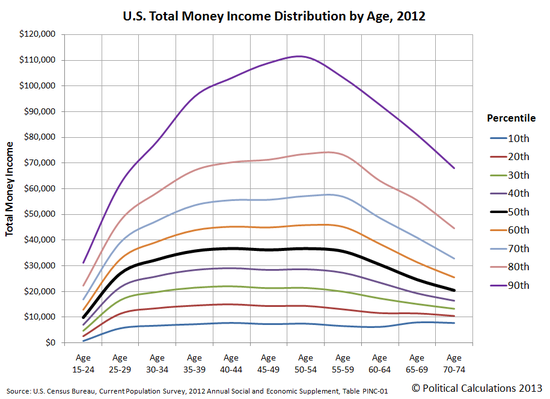 We see incoming rising sharply with age in the 20s, slower in the 30s, plateauing through the 40s and 50s, and then declining with retirement. Add to this a small amount of growth in real wages over time, about 8% over the last 40 years, and we can see that people in their 20s earn significantly less than they expect to be earning over most of their life.

The standard model of people is that spending money makes you happier, and the first dollar goes farther than the last: 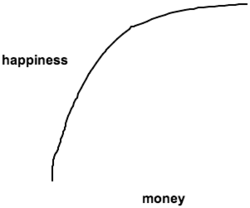 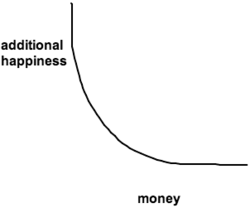 Add temporal discounting and that you can enjoy durable goods for longer if you buy them earlier and we should expect to see people borrowing heavily in their 20s and paying it back as they get older, but we mostly don't. We do see this some with buying houses, but in most other ways the typical 50 year-old is much less frugal than the typical 25 year-old. When we see young people living on borrowed money to support a lifestyle they would expect to enjoy later in life, we generally mock them. [2]

One response is to say that people are behaving foolishly and should borrow more. Why live thrifty in your 20s but not in your 40s? Either you should continue your thriftiness into your 40s, spend more in your 20s, or some combination of both. But this misses something important about human psychology: decreases in our standard of living are much more painful than increases are pleasant.

If you're earning a relatively small amount and living cheaply, and then earn more money and start living less frugally, this probably makes you happier. But if then something happens and you need to go back to living on less you'll probably be much less happy than you were the first time. Because individual incomes are much less predictable than cohort incomes, if you borrow a lot while young to consume at a higher level you might be anticipating a future level that you'll not reach or not sustain once reaching.

(This is why I try to be careful with luxuries.)

[2] Though in this case I think the author has other reasons to dislike their subject than consumption habits.