When the Free Raisins run our own sound I record our playing to listen back to later. I keep these recordings, but seven tracks at 1GB each starts to add up. I could compress them as mp3s, but I might want the full-quality versions some day. I looked into lossless audio compression, and FLAC seems to be the most widely supported open codec. While I've seen people find compression ratios of about 50% for FLAC, I was expecting better than this because while I generally record a whole 3hr performance only some of that has much signal. Compressing at level 8 I ended up with files 67% smaller than whan I started: 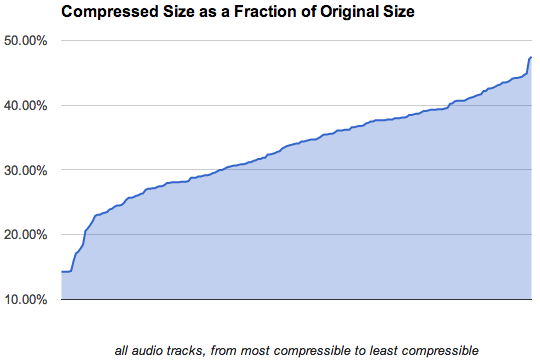 (The files at the far left, squished down to 14.3% of their original size, consist entirely of silence. This is because when using my vsl1818 with Audacity I can only record tracks 1 through N. If for some reason we've set things up so no one is plugged into track 4, I still end up with a recording of that track, 3hr of silence. Ignore these in computing the average and flac only managed to make things 66% smaller.)

I could have combined multiple tracks from the same dance into one multi-track flac for better compression, but this seemed like too much hassle and too much chance of making files that would be hard to work with later.