With the new Affordable Housing Overlay District (ordinance 2020-27) here in Somerville, affordable housing construction can be very profitable. For example, below I estimate someone could spend ~$220/sqft and sell for ~$550/sqft, all while helping fix the housing crisis. So: come build!

The new affordable housing rules, which went into effect in December, allow higher density construction on the condition that the housing be permanently affordable. This is solid politics: affordable housing is very popular here. Below, I'm going to try to estimate how much you could make if you invested in creating additional housing as efficiently as possible.

The first question is how much you would be able to earn from creating additional units. The ordinance defines "affordable dwelling unit" (ADU) as a "dwelling unit sold, leased, or rented at a price affordable to a specific household income specified by this Ordinance or other Federal, State, or local affordable housing program." (2.1) For expediency I'm just going to look at the definition of "affordable to a specific household income" in Somerville zoning, and not also dig into Federal/State regulations. This means there's potentially an option for less restrictive pricing that I'm not getting into.

There are normally requirements for how many of each tier you are required to build, if you're building ADUs as part of a market rate development, but 8.1.3.e says "development subject to this section is exempt from Section 12.1 Affordable Housing". If you're trying to maximize return, you build units entirely targeted at the highest tier.

The next step is to convert these multipliers into a maximum monthly payment. The Median Family Income for Boston-Cambridge-Quincy is $120,800 for 2021, so this gives us:

Since it looks like the sale numbers are a bit more favorable, let's assume the units will be sold. The maximum sale price is 103% of the size of the mortgage you could get with the maximum monthly payment. Since the current rate is 2.78%, per FRED, we have:

Note that mortgage rates are historically low right now, and higher rates give lower sale prices. For example, at 5% a 2br would have to sell for $490k, down 24% from $642k.

These are still more expensive than I'd like, but they're much cheaper than anything on the market today, let alone anything in the excellent condition that new construction would be.

Working from the table you can see how much units of each size are allowed to sell for. Since this is the same all over the city, you make the most by building where land is cheapest, but as you'll see below land costs are actually a very small portion of the total.

You are allowed to build either an apartment building or a general building (with 40% residential and the rest from a list of approved uses). Since there are no restrictions on rents for the non-residential portion of a general building you very likely earn more if you build something that's 60% commercial (health care or daycare) and 40% residential, especially in a high-demand area. I'm going to ignore this, though, and assume you just build ADUs.

There are small setback restrictions, but I think in most cases the limiting factor will just be lot coverage. For Mid-Rise 3-5 this is 90%. If a lot is 5k sqft (say, 50x100) then seven stories at 90% coverage gives you 32k sqft. This is a lot!

If you follow the requirements for a Net Zero Ready Building you're allowed a minimum space per unit of 850 sqft. This is "has no on-site combustion for HVAC system operation and cooking equipment (all electric systems) [...] and is certifiable as Zero Carbon or higher from the International Living Future Institute, or PHIUS+ from the Passive House Institute US." Otherwise you need 1,125 sqft for larger lots and 1,500 for smaller ones.

Let's work two example lots, one small and one large, and see how this works out.

230 Pearl St is a small single-family that Zillow estimates at $1M: 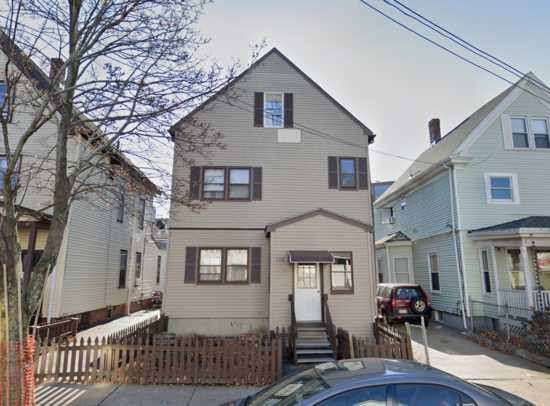 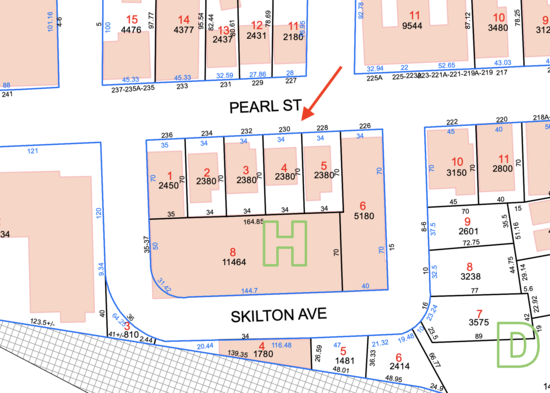 There's a requirement for a 10ft rear setback, which on a 70ft lot has a larger effect than the 90% max coverage requirement. This won't be the case for most lots in the city, but I chose a tiny one here. A 34x60 building at the front of the lot would give 2040ft per floor. Lose 64 sqft from each floor for a pair of staircases and another 20 for a small elevator and you get seven floors of 1956 sqft each. Build each floor two 2brs (978 sqft each) and the city allows you to sell them as $640k condos. Note that you do not need to provide any parking. With revenue of $9M and a purchase cost of $1M, break-even cost on design, permitting, demolition, construction is $557/sqft. Even if you sold them at Tier 1, $345k/unit, you'd still be profitable, with a break-even cost of $268/sqft.

Taking a larger example, 67 Broadway is a house that's been converted into a marijuana dispensary, with a parking lot: 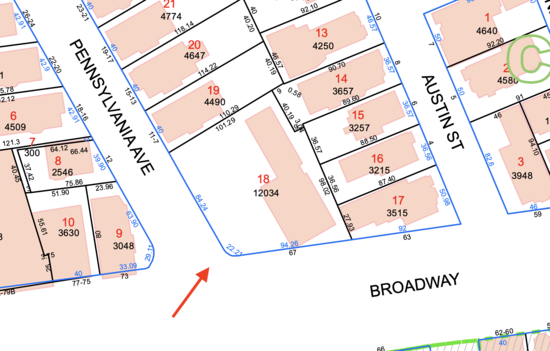 Housing construction here is typically $150 - $200 per sqft and demolition is ~$10/sqft (on a much smaller structure). This leaves a lot of room for me being too optimistic and you still walk away with a substantial profit.

One way to find properties that might be a good fit is to look for parcels zoned MR4-MR5 with a large lot area for their valuation. While valuations aren't all that accurate, they're still reasonably correlated with what a sale would be. I made a table of these parcels, sorted by valuation per square foot of land: parcels.tsv. While there are definitely lots it identifies that wouldn't work, it also has many that would.