Soon after we moved into our new house I built a bunch of shelving in the basement. I didn't write about it at the time, because I was pretty busy with a new house and small children, but yesterday I helped my dad build shelves in his basement and wanted to write up notes.

The space available was about 22' long, though with some obstructions at each end: we didn't want to get too near the valve for draining the hose on one end, or block a window from opening on the other, so we ended up building something 21' long.

The basic plan was a series of "ladders" of 2x3s, attached to the floor joists above, with 16" plywood strips for the shelves sitting on the "rungs": 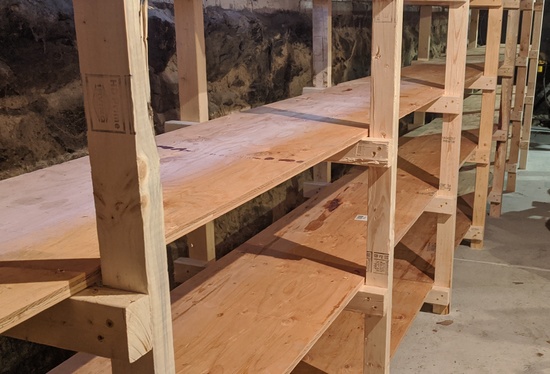 We ordered these to be delivered to the house: I'm generally very much in favor of having building materials delivered. We also had them cut the sheets into 16" strips, since these are cuts that are much easier to make on the store's panel saw.

We marked off one 18" shelf and four 15" shelves down from the rafters on one vertical in each pair: 18", 33", 48", 63", 78". This made sense, because the floor above was reasonably level. We transferred these marks to the other vertical with a level. We cut 35 24" lengths of 2x3 to use for rungs, and attached them to the verticals at the marks. We had some help: 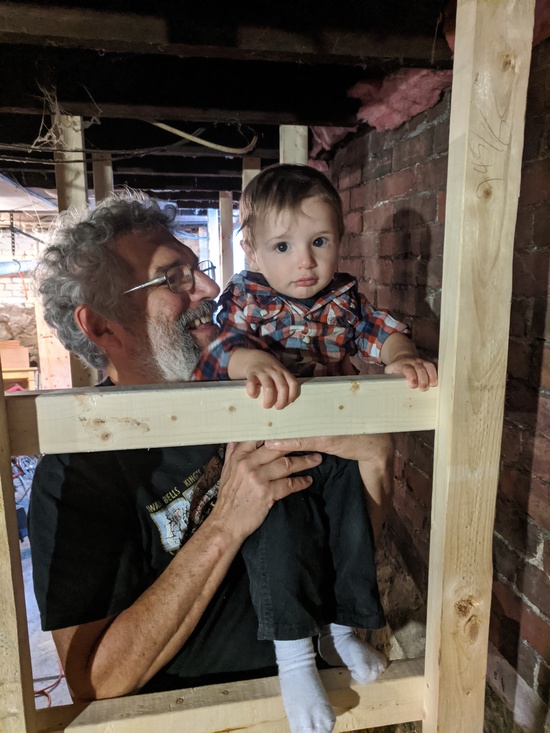 We cut the middle section of shelf strips to length (61"), and left the two side sections at 8'. Then we put them in, and screwed them down.