People vary in how much they can taste bitter things. If you go around giving people the chemical Phenylthiocarbamide (PTC), which you shouldn't do, because it is toxic, you'll find that some people taste it as a strongly bitter while others can't taste it at all. Same with 6-n-propylthiouracil (PROP). While these aren't common in food, they're very similar to chemicals that are in a lot of foods, so you might think that how much you can taste PTC or PROP might influence what foods you like.

We can test this. Give people various foods that there is dispute about the bitterness of, and then compare their preferences to their sensitivity to PTC or PROP. Several studies have done this:

Vegetables like broccoli are often thought to be good for you, so shouldn't we expect to see people who taste PROP and PTC not live as long, because they're eating less of those? Ideally we would test how sensitive people are to bitterness at some youngish age, and then watch them for the next 80 years to see how long they lived. But 80 years is a long time to wait, and you're going to need a large sample because we don't expect the effect to be that big. Another option would be to measure sensitivity to bitterness, and see whether it decreased with age in the same way we would expect if the people with increased bitterness sensitivity were dying earlier. But this is going to be impractical to separate from the hypothesis that simply individual people lose some of their sense of taste over time.

Luckily, it turns out that this tasting ability is very strongly genetic. People with one variant of the gene TAS2R38 can nearly always taste PTC while people with another variant almost never can. So we can sample people at any age and get an estimate of how likely they were to have avoided vegetables for taste reasons. Are older people less likely to have the gene variant for tasting bitterness? It turns out they are. In Bitter Taste Receptor Polymorphisms and Human Aging (2012, n=941) they tested Calabrians (Sourthern Italians) for their bitterness gene variant, and did find that older people were less likely to have the variant for detecting bitterness: 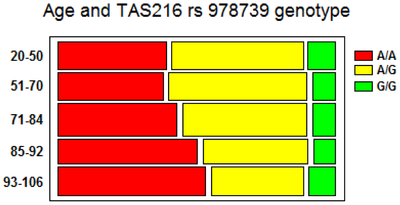 So can we say that (a) eating vegetables will help you live longer and (b) if vegetables taste bitter to you should eat them anyway to get benefit (a)? Unfortunately it's not that clear. Vegetables aren't the only common food with these bitterness compounds, so it might be something else. Other bitter-to-some foods that these non-bitter-tasters might have been eating more of include coffee, tea, grapefruit juice, soy, cigarettes (maybe), and probably other things we haven't tested. There's also the possibility that the older and younger participants in the longevity study aren't the same group of people genetically, and what they're actually capturing is population changes in Calabria. One way to test that would be to repeat the study in several different places, as we would expect population drift to be independent of sensitivity to bitterness.

←
How is a 401k tax advantaged? Fix Your Facebook Email
→