Visiting my cousin's house over christmas, he had built two things that I really think should be everywhere:

With a standard wood burning fireplace, it's pleasant to sit in front of it, but it cools down the rest of the house. My parents usually only run theirs in the spring and fall when the heat is off, because if it's on the net effect is to cool the house. By sending air through pipes in the middle of the fire, more of the heat would end up in the room instead of going up the chimney: 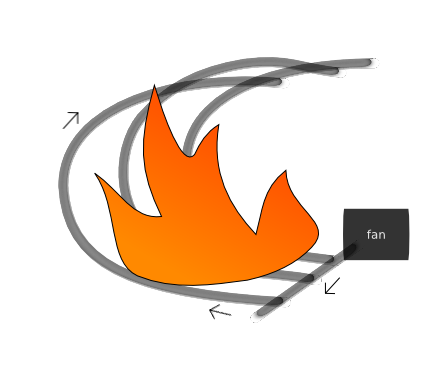 The other neat thing was to connect the exhaust fan for the bathroom to the toilet bowl instead of putting it on the ceiling. This means smells disappear right away, instead of having to cross the room first.
←
Trackpad Synth: Video Trackpad Synthesizer: Command Line Options
→