Beantown Stomp is a bit over two months away, and here's what registrations look like: 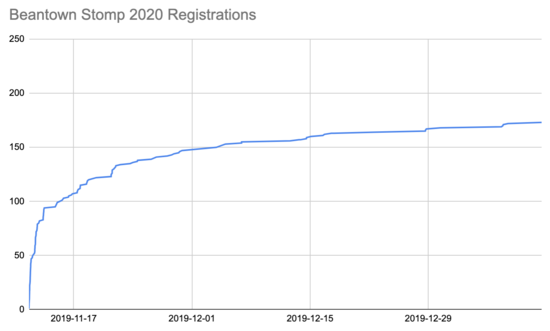 The way these things usually work is that there's an initial wave of registrations when things open, then there's a long period of gradual registrations before at some point people start thinking "this is going to sell out soon!" and there's a second wave.

I'm not sure when that will happen, but if you've been meaning to register better to do it sooner!

Of the 173 people who have registered so far, 91 have paid. We're doing sliding scale admission:

Last year we asked for $50-$150/person, and did a little better than break-even. We're planning to admit more dancers this year, so we think we're able to move the price a bit lower, to a sliding scale of $30-$130. If you're able to pay toward the higher end, that's what makes it possible for us to offer admission to others below cost. We also have volunteer spots available.

Here's what people have been paying so far: 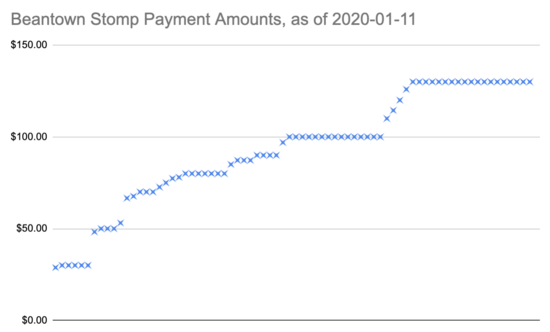 This is a bit higher than we've been expecting, which is helpful! Though it's also possible that being able to register and pay sooner correlates with being able to pay more?

Overall I think we're in good shape, and I'm looking forward to the weekend!

←
Repossessing Degrees Farewell to the Entertainer
→