Atheism is sometimes given as an example of an identity that has successfully increased its gender diversity. Historically more men than women have not believed in God, but over time this has become less of a male thing. How do we see it changing over time? How big has the change been?

One place to look is the General Social Survey (GSS). This is a set of responses to survey questions asked since 1972, and while some questions aren't asked every year there is a lot of overalap. This makes it a good fit for seeing how people's views have changed over time.

Please look at this card and tell me which statement comes closest to expressing what you believe about God.

Responses of "don't know" and "no answer" were also possible. I coded people as "skeptic" if they answered with one of the first two responses: people who don't believe in God or believe there's no way to find out. Graphing these as a percentage of the population of each gender we get: 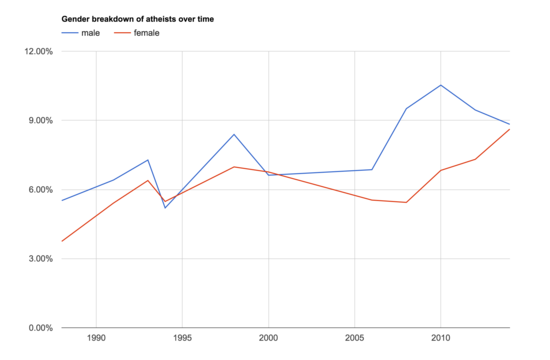 Another place to look for something similar is the CIRP survey, including tens of thousands of students at hundreds of colleges. Students are asked what their current religious preference is. Allen Downey graphed the percentage of men and women answering "None" over time: 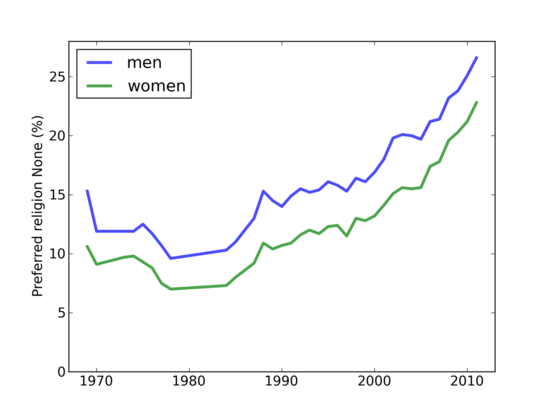 (Note that this isn't quite the question I'd like, since someone can be non-religious but still believe in God, but it's close.)

This is much less noisy than the GSS data, enough that the way the curves track each other is kind of suspicious. The number of respondents is much higher, though, so that could explain it. It does look like the gender ratio is becoming much more balanced, from 41% female in the late 70s to 47% female in the latest data. [1]

I don't have any hard conclusions to draw from all this, I just wanted to see what the numbers looked like over time.

←
After the Game Dismissing Causes
→