In general I'm not a fan of written music, especially for folk music. Standard notation doesn't do a good job of capturing the essence of the tune, and I've heard too many people play rigidly from sheet music. Now that we can easily record tunes and send them to each other, there's much less need for written music than there used to be. So when I write tunes I tend to record myself playing them, once very slowly and once up to speed: Corriente, Turkey Strumstick, Julia's Waltz.

Not everyone thinks of the world this way, however, so if I want other people to play my tunes I should figure out how to write them out as dots. I spent some time with those three tunes but notating rhythm is really hard. I ended up with what I think is a decent version of Corriente, but nothing for the other two. 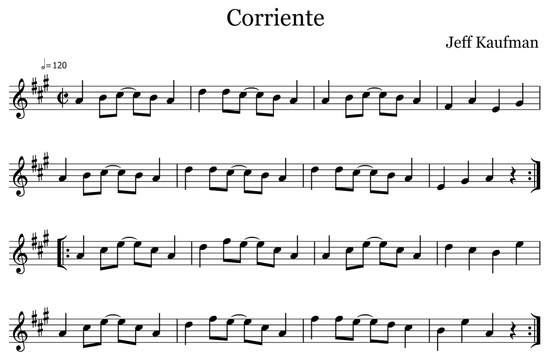 If I was going to write a lot of tunes down it would be worth it for me to learn the standard notation well, but if I'm only going to do it very occasionally that's probably not a good use of time. Are there programs that turn audio into sheet music? Or take midi as input and quantize it? Most of what I can find seems to get the pitches right but have trouble with rhythm, which unfortunately is also the problem I have.

Update 2014-05-01: At the suggestion of people who understand music notation better than I do, I've changed it from 2/4 to 2/2 and switched to using a tied note to cross the beat in the middle of each synchopated measure. The original version was: 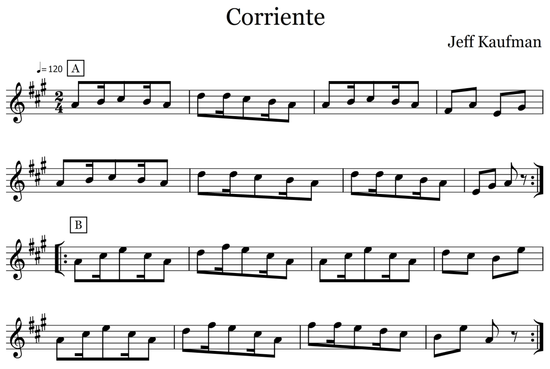