Update 2014-04-17: This post is a satire of Why I Can't Stand White Belly Dancers. I don't actually have a problem with Japanese people or anyone else square dancing. While the anger and argument below are imagined, the rest is accurate. I'm happy to have anyone square dance who would like to, and if they're having fun I'm happy. 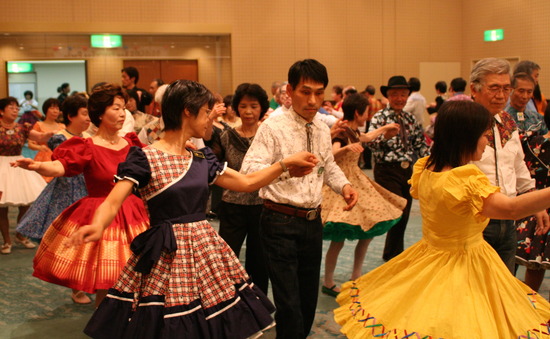 Google スクエアダンス, and the first images the search engine offers are of Japanese women in frilly petticoats and Japanese men in western shirts and string ties, playing at a traditional American rurality. How did this become acceptable?

The term スクエアダンス itself is an Eastern one. In English this kind of dance is called "Square Dance," after the traditional formation of the dancers. Growing up in the Eastern United States I saw people in my community Square Dance at weddings and parties. People often danced with their friends in private spaces, so this dance was for each other. When they danced at big social dances the dynamic shifted, more competitive, more flirty. When people danced at house parties, among friends, there was a different kind of energy in the air, perhaps more powerful, definitely more playful, or maybe that's how it felt to me as a child and teenager, wary of adult ways of socializing. At these parties there was always live music, played by my parents or other adults in my community, never the same, always fascinating. At weddings the dancing was celebratory and beautiful, something a professional "dance caller" would come in and lead, and something that everyone else would dance together. Again the band was always live, but instead of the informal gatherings of musicians familiar to me from house parties there would be a professional band on stage, captivating in their mastery of the art. At my wedding I wanted to dance. I hired a band that specialized in traditional American music and danced with my family and friends, not all of whom were white.

When I see Japanese people square dancing I feel physically sick. They wear American drag—because that's what it is—when a person who's not American wears a cowboy hat, boots, and a western shirt, or high-waisted frilly petticoats out of a 1950s stereotype. They dance hundreds of invented figures which they learn in weeks of classes, instead of the couple dozen traditional figures that I learned as a child dancing in the kitchen with my family. But the most hurtful aspect is the music. They dance to recorded music, something that was never done in New England where I grew up. I remember people would say "I'd rather dance to a single fiddle, played by someone who only knows one tune, than to any kind of canned crap." The recordings lack the vitality and spontaneity, the communication between the dancers and the musicians, and they reduce the music to a simple phraseless beat to be danced to.

Japanese square dancers I have confronted about this have said, "But I have been dancing for 15 years! This is something I have built a huge community on." These people are more interested in their investment in Square Dance than in questioning and examining how their appropriation of the art causes others harm. To them I can only say, I'm sure there are people who have been unwittingly racist for 15 years. It's not too late. Find another form of self-expression. Make sure you're not appropriating someone else's.

When I have argued, online and in person, with Japanese square dancers, they have assured me that they learned to dance from American callers and white callers. This is supposed to make the transaction OK. Instead I point out that all this means is that it is perfectly all right with these callers that their financial well-being is based on self-exploitation. As a follow-up, Asian square dancers then focus on the community aspect of square dancing. But, here's the thing. American dancers are not vessels for Japanese people to pour themselves and lose themselves in; we are not frilly skirts or string ties or oversized belt buckles. We are human beings. This dance form is originally ours, and does not exist so that Asians can have a better sense of community. Just because an Asian square dancer doesn't profit from their performance doesn't mean they're not appropriating a culture. And, ultimately, the question is this: what's different between this and Why I can't stand white belly dancers?