I've been thinking about what I want in a virtual wind instrument and how it differs from a keyboard instrument. On a keyboard there's: A wind instrument adds: Your typical virtual instrument (synth) only has one parameter that can be expressively adjusted after the note has started: volume. For example, to simulate an organ with a swell box you can do well with just having volume (dB) vary linearly with pressure: 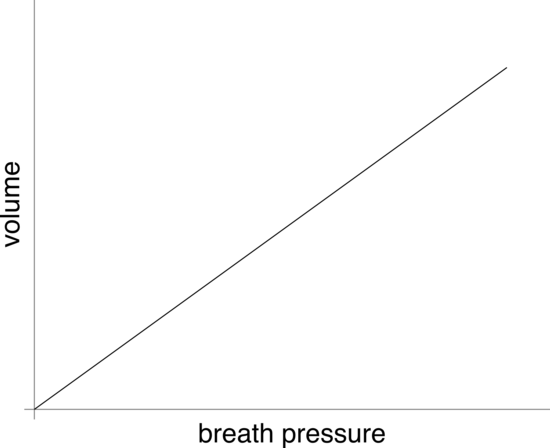 Most real instruments change their tonal qualities as you increase pressure/force/tension, however, and this is a good thing! It lets you vary the feeling of the instrument much more than by just getting louder and softer. While in acoustic instruments this typically comes along with large variations in volume, we usually adjust that out by adding compression. you generally want volume to increase at first and then level off:

While the tone goes from something clean/sweet/pretty to something a bit harder/dirtier/rougher: 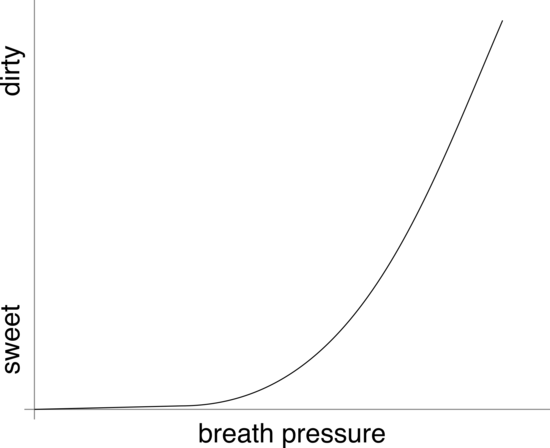 We can call this combined volume and roughness 'intensity', and in these graphs above I've shown intensity rising with breath pressure.

A note generally has two aspects: the initial sounding (the attack) and everything else (the sustain). On a keyboard synth these are controlled together by how hard you press the key. You can't, for example, choose between a low and high intensity attack to pair with a given intensity of sustain. And you can't vary the intensity of the sustain over the course of the note.

Which gets to how I want a virtual wind instrument to work:

This is close to how the saxaphone synth I've been using works, except that attack intensity isn't treated as a function of overal intensity. If you whack on the keys it will make the 'attack' noises even if there's no breath pressure, and to get it to sound good you need to vary your key press pressure along with the breath pressure to keep an appropriate attack intensity for a given sustain intensity.

I'd like to play around with other sounds, but I haven't yet figured out how to find/build something which breaks down the sound this way.