Growing up my grandmother would tell stories about growing up in (Taigu), in north China. Some of the stories were about life there, others were folk tales they'd learned. One of the ones she would tell was about a "filial tiger" [1], who supports an old woman after eating her son.

A little while ago my aunt found the galley proofs from a version of the story my great grandmother had sent to Story Parade magazine: 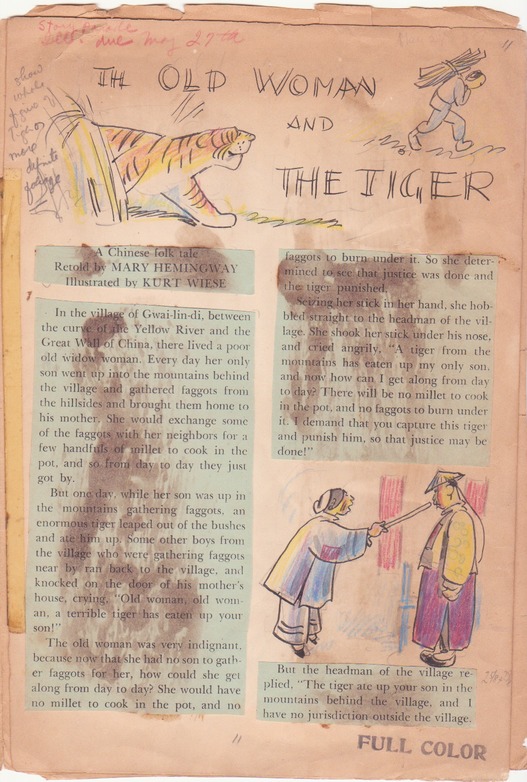 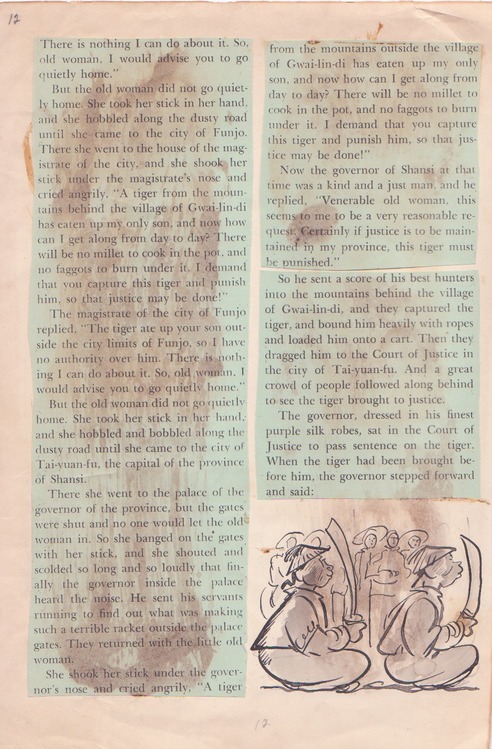 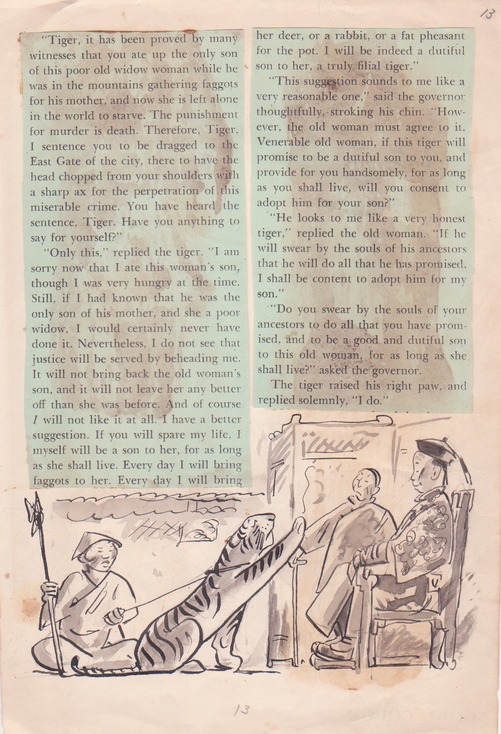 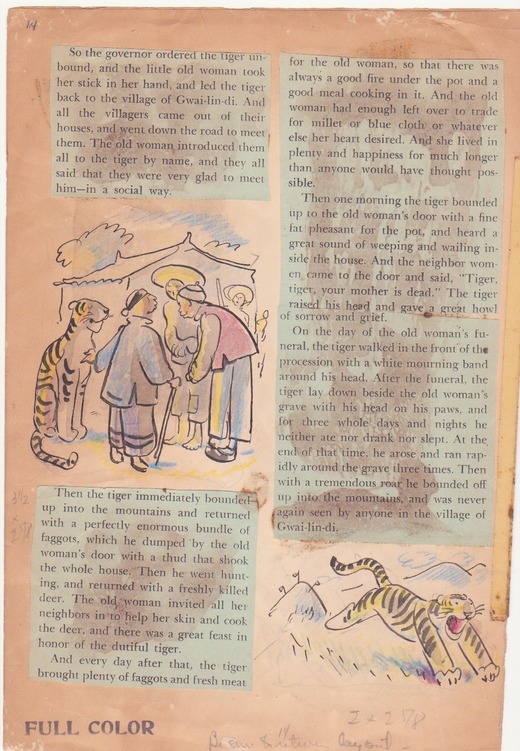 The Old Woman and the Tiger
A Chinese folk tale, retold by Mary Hemingway

In the village of Gwai-lin-di, between the curve of the Yellow River and the Great Wall of China there lived a poor old widow woman. Every day her only son went up into the mountains behind the village and gathered faggots from the hillsides and brought them home to his mother. She would exchange some of the faggots with her neighbors for a few handfulls of millet to cook in a pot, and so from day to day they just got by.

But one day, while her son was up in the mountains gathering faggots, an enormous tiger leaped out of the bushes and ate him up. Some other boys from the village who were gathering faggots near by ran back to the village, an knocked on the door of his mother's house crying, "Old woman, old woman, a terrible tiger has eaten up your son!"

The old woman was very indignant because now that she had no son to gather faggots for her, how could she get along from day to day? She would have no millet to cook in the pot, and no faggots to burn under it. So she determined to see that justice was done and the tiger punished.

Seizing her stick in her hand, she hobbled straight to the headman of the village. She shook her stick under his nose and cried angrily. "A tiger from the mountains has eaten up my only son, and now how can I get along from day to day? There will be no millet to cook in the pot, and no faggots to burn under it. I demand that you capture this tiger and punish him, so that justice may be done!"

But the headman of the village replied, "The tiget ate up your son in the mountains behind the village, and I have no jurisdiction outside the village. There is nothing I can do about it. So, old woman, I would advise you to go quietly home."

But the old woman did not go quietly home. She took her stick in her hand, and she hobbled along the dusty road until she came to the city of Funjo. There she went to the house of the magistrate of the city, and she shook her stick under the magistrate's nose and cried angrily, "A tiget from the mountains behind the village of Gwai-lin-di has eaten up my only son, and now how can I get along from day to day? There will be no millet to cook in the pot, and no faggots to burn under it. I demand that you capture this tiger and punish him, so that justice may be done!"

The magistrate of the city of Funjo replied, "The tiger ate up your son outside the city limits of Funjo, so I have no authority over him. There is nothing I can do about it. So, old woman, I would advise you to go quietly home."

But the old woman did not go quietly home. She took her stick in her hand, and she hobbled and bobbled along the dusty road until she cam to the city of Tai-yuan-fu, the capital of the province of Shansi.

There she went to the palace of the governor of the province, but the gates were shut and no one would let the old woman in. So she banged on the gates with her stick, and she shouted and scolded so long and so loudly that finally the governor inside the palace heard the noise. He sent his servants running to find out what was making such a terrible racket outside the palace gets. They returned with the little old woman.

She shook her stick under the governor's nose and cried angrily, "A tiger from the mountains outside the village of Gwai-lin-di has eaten up my only son, and now how can I get along from day to day? There will be no millet to cook in the pot, and no faggots to burn under it. I demand that you caputre the tiger and pusnish him, so that justice may be done!"

Now the governor of Shansi at the time was a kind and a just man, and he replied, "Venerable old woman, this seems to me to be a veery reasonable request. Certainly if justices is to be maintained in my province, this tiger must be punished.

So he sent a score of his best hunters into the mountains behind the village of Gwai-lin-di, and they captured the tiger, and bound him heavily with ropes and loaded him onto a cart. Then they dragged him to the Court of Justice in the city of Tai-yuan-fu. And a great crowd of people followed along behind to see the tiger brought to justice.

Thegovernor, dresed in his finest purple silk robes, sat in the court of Justice to pass sentence on the tiger. When the tiget had been brought before him, the governor stepped forward and said:

"Tiger, it has been proved by many witnesses that you ate up the only son of this poor old widow woman while he was in the mountains gathering faggots for his mother, and now she is left alone in the world to starve. The punishment for murder is death. Therefore, Tiger, I sentence you to be dragged to the East Gate of the city, there to have the head chopped from your sholders with a sharp ax for the perpetration of this miserable crime. You have heard the sentence, Tiger. Have you anything to say for yourself?"

"Only this," replied the tiger. "I am sorry now that I ate this woman's son, though I was very hungry at the time. Still, if I had known that he was the only son of his mother and she a poor widow, I would certainly never have done it. Nevertheless, I do not see that justice will be served by beheading me. It will not bring back the old woman's son, and it will not leave her any better off than she was before. And of course I will not like it at all. I have a better suggestion. If you will spare my life, I myself will be a son to her, for as long as she shall live. Every day I will bring faggots to her. Every day I will bring her deer, or a rabbiy, or a fat pheasant for the pot. I will be indeed a duitiful son to her, a truly filial tiger."

"This suggestion sounds to me like a very reasonable one," said the governor thoughtfully, stroking his chin. "However, the old woman must agree to it. Venerable old woman, if this tiger will promise to be a dutiful son to you, and provide for you handsomely, for as long as you shall live, will you consent to adopt him for your son?"

"He looks to me like a very honest tiger," replied the old woman. "If he will swear by the souls of his ancestors that he will do all that he has promised I shall be content to adopt him for my son."

"Do you swear by the souls of your ancestors to do all that yu have promised, and to be a good and duitiful son to this old woman, for as long as she shall live?" asked the governor.

The tiger raised his right paw, and replied solemnly, "I do."

So the governor ordered the tiger unbound, and the little old woman took her stick in her hand, and led the tiger back to the village of Gwai-lin-di. And all the villagers came out of their houses, and went down the road to meet them. The old woman introduced them all to the tiger by name, and they all said that they were very glad to meet him—in a social way.

Then the tiger immediately bounded up into the mountains and returned with a perfectly enormous bundle of faggots, which he dumped by the old woman's door with a thud that shook the whole house. Then he went hunting, and reutned with a freshly killed deer. The old woman invited all her neighbors in to help her skin and cook the deer, and there was a great feast in honor of the dutiful tiger.

And every day after that, the tiger brought plenty of faggots and fresh meat for the old woman, so that there was always a good fire under the pot and a good meal cooking in it. And the old woman had enough left over to trade for millet or blue cloth or whatever else her heart desired. And she lived in plenty and happiness for much longer than anyone would have thought possible.

Then one morning the tiget bounded up to the old woman's door with a fine fat pheasant for the pot, and heard a great sound of weeping and wailing inside the nouse. And the neighbor women came to the door and said "Tiger, tiger, your mother is dead." The tiger raised his head and gave a great howl of sorrow and grief.

On the day of the old woman's funeral, the tiger walked in front of the procession with a white mourning band around his head. After the funeral, the tiger lay down beside the old woman's grave with his head on his paws, and for three whole days and nights he neither ate nor drank nor slept. At the end of that time, he arose and ran rapidly around the grave three times. Then with a tremendous roar he bounded off up into the mountains and was never again seen by anyone in the village fo Gwai-lin-di.


[1] Looking online (in English) I didn't find any other variants of this story, but I did find a Korean one where the son convinces the tiger that they are brothers, and so the tiger decides to support their mother instead of eating the son: pdf.