If a resonably fit desk worker switches to a standing desk, what are the health effects? Working at a computer, a lot of people spend a lot of time sitting. Would switching to standing desks be better?

In Leisure Time Spent Sitting in Relation to Total Mortality in a Prospective Cohort of US Adults (2010) they did a reanalysis of a large (~120K people) questionaire-based study and looked at how sitting time correlated with whether you had died in the 14 years (1.6M person-years) since the study. The question they used was:

During the past year, on an average day (not counting time spent at your job), how many hours per day did you spend sitting (watching television, reading, etc.)?

It was multiple choice, with answers of <3, 3-5, 6-8, and >8 hours per day. Comparing the people who responded <3 with ≥6, they found that the group that sat more was more likely to have died during the followup period (37% more likely for women, 18% for men).

While they did control for many things (age, reported physical activity, race, smoking, BMI, marital status, education, drinking, caloric intake, fruit and vegetable intake, fat intake, red meat intake, occupational status, high blood pressure, diabetes, high cholesterol) they did not control for amount of time sitting at work. For example, it could be that people who work on their feet are more tired at the end of the day and so spend more of their leisure time sitting. In which case this might mean standing at work was bad for you. They also are looking at existing behavior, not modifying behavior, so it's possible that the people who reported less sitting were somehow healthier in some other way their controls didn't capture. While I do take this study as evidence that switching to standing at work is healthier, it's not strong evidence.

Sitting Time and Mortality from All Causes, Cardiovascular Disease, and Cancer (2008) was a similar study. While 1/10th the size of the one above (17K people, 118 person-years of followup) they claim to have had access to better data on sitting:

The survey that they're using data from doesn't appear to have asked this, however: 1981 Canada Fitness Survey full questionnaire. I may be missing something, but I can't find where they're getting this data. I've written to the study author; I could be wrong.

They also found sitting harmful. Their graph showing how many people remained alive N years after the study broken down by how much time they claimed to have spent sitting at the time of the study: 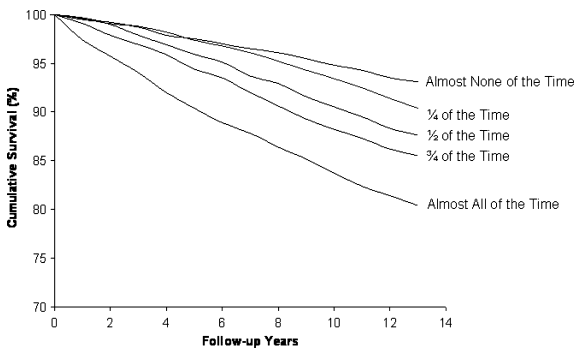 While I'd really like a study that randomly assigned many people to switch to standing desks and looked back in a decade, I don't think such a study exists. These two do indicate that standing desks are helpful, but representing their benefits as something like "they decrease the chance that you'll die in the next 15 years by 20%" is misleading.

(I've been using a standing desk for almost a year. I stand most of the day, but usually sit for a couple hours after lunch.)