As a kid I remember being very impressed with Trick-or-Treat For Unicef because they could do so much with so little money: 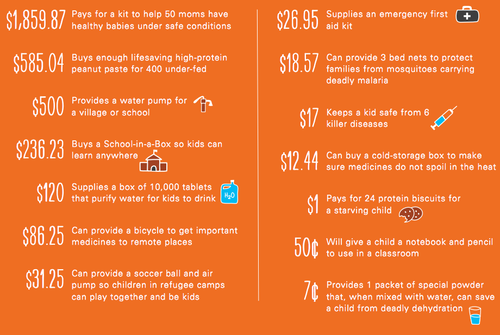 When my Quaker youth group was deciding who to raise money for, we chose Unicef because (of the small number of charities we were familiar with) they made the strongest claims. Saving lives for "7¢ per dose": impressive!

While not entirely false, however, these numbers are certainly misleading. Seven cents for oral rehydration therapy is about right in the sense that the ingredients are very cheap: sugar and salt. But if we really could save children's lives for 7¢ then why would we consider anything else on Unicef's list? Spending $17 to for a vaccination to "keep a kid safe from 6 killer diseases" would mean letting over two hundred other children die! What's going on?

The issue with oral rehydration therapy is that the limiting factor is almost never the raw cost of the ingredients. Instead it's mostly knowlege, and that the easy places to get it to now have it. It's been a great success, but pushing it farther gets increasingly expensive. The cost of producing a packet is a really bad stand-in for the marginal cost of saving someone from death by dehydration.

Now, technically Unicef wrote that it "can save a child" not "saves a child", so they're not really lying. [1] But they're trying to get people to donate based on a false impression of efficacy, and that's harmful. It means when GiveWell writes that the best charity they've identified saves lives for around 35,000 times more money people are surprised at the cost and wonder why they can't manage to do better. It makes people think quantifying the good of donations is a solved problem when that process still gives results that are too fragile to be used as your raw decision-making metric. The "a little money goes a ridiculously long way" meme needs to stop.


[1] Though they use the same wording for things like "can provide a soccer ball" where there's far less uncertainty.